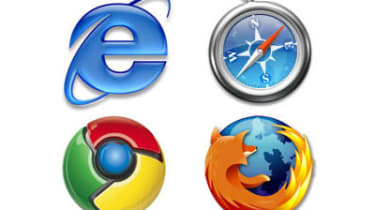 Chrome remains a fast browser, but today it no longer enjoys pole position: Firefox 3.1 uses an updated rendering engine and an all-new JavaScript engine, the curiously-named TraceMonkey. Thus turbo-charged, the latest beta beats Chrome with a SunSpider time of just 2.02 seconds. And Apple's Nitro engine, as built into Safari, outpaces them both, scoring a lightning-fast 1.89 seconds.

The only beta that doesn't keep up is IE8. With a SunSpider execution time of 7.43 seconds, it's a long way behind the rest of the pack, so feature-rich sites like Gmail and Google Docs are likely to feel less snappy and responsive. Still, it's better than IE7.

Another factor worth considering is RAM usage, especially if you're choosing a browser for use on a low-powered system such as a netbook. Firefox used to be a notorious memory hog, but the current version is impressively efficient: with twelve tabs open we measured its memory usage at just 76MB, by far the lowest of the four contenders. Chrome and IE8 made much greater demands, eating up 134MB and 158MB respectively but that's partly because, to improve stability, these browsers run each tab as a completely separate process. That means that if one web page crashes, the rest of the application should continue running without a hiccup.

Safari doesn't use such a system, so we were disappointed to see it gobble up the same amount of RAM as Chrome when displaying the same twelve tabs. And switching to the glitzy top sites view immediately consumed another 100MB. Clearly it's not a browser for a lightweight PC.

Those are the big differences, but every browser has its own little idiosyncrasies and distinctive interface features, and to the individual these can be just as important. The good news, though, is that while each contender has its own personality, the differences are dwarfed by the amount they have in common. Clearly, web browsers are converging toward a de facto standard in terms of both function and usability, and that's an encouraging sign of a software sector that's reaching maturity.

Click the next page to see our Good and Bad points run down of each browser and our summary of our speed benchmarks.