Privacy concerns likely to again be an issue as Google's detailed photo mapping service launches in the UK. 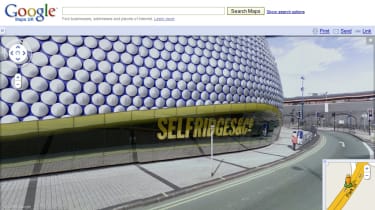 Productivity will take a hit this morning in offices across 25 cities in the UK, as Google's Street View is officially launched, letting us all look up photos of our favourite places and walk down our local streets using our computers.

London, Edinburgh and 23 other cities have been included see below for the full list. The IT PRO office hasn't yet been included, but our local pub has made it in.

Click here for Street View photos from around the UK.

Because of the level and detail of coverage, there have been privacy concerns. Japan has banned the Street View and the UK's Liberal Democrats has raised questions in Parliament about it, in addition to other Google services, such as its Latitude mobile phone tracking.

Regarding privacy, Google said in a statement: "Google has gone to great lengths to safeguard privacy while allowing all British users to benefit from this feature. Street View only contains imagery that is already visible from public roads and features technology that blurs both faces and licence plates."

Google said is promising to remove images if requested by individuals, a move which has apparently won approval from the Information Commissioner's Office. Images can be flagged for removal using the "report a concern" link in the system.

Street View is available via Google Maps, as well as through Google Earth and via Google Maps for Mobile. To access it using Google Maps, zoom as far as you can to street level on a map of a featured city. Grab the little orange "Pegman" icon and hover it over the map; included streets will turn blue. Drop the man icon onto the street you want to see, and the map will flip to Street View.

Google is also pushing the service as a tool for businesses, too, saying they can embed it into their own site for no charge, giving potential customers a view of the company. An example of this using pubs can be seen here.

Google gets the images by driving a van up and down streets, taking photos as it goes. Google said its drivers found London the most difficult place to drive, because of its one-way streets, high buildings and lack of parking. Last summer's rainy weather didn't help, as clear days are needed for driving. As of today, Google's Street View drivers have covered 22,369 miles of UK roads.