The final version of Internet Explorer 8 has finally landed. Has Microsoft done enough to reel the browser defectors back in? 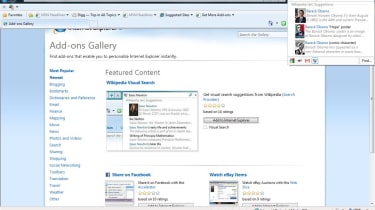 Back in the 90s, Bill Gates was slow of the mark when it came to seeing the potential of the internet, letting Netscape build a sizable lead in the market with its Navigator browser as a result.

In typical Microsoft fashion, the first two versions of its internet browser (released in August and November 1995 respectively) went largely ignored, but by the third version arrived (August 1996) it was starting to gain some attention.

Many will remember watching their PC slowly, slowly install the behemoth that was IE4 in September 1997. This was first time it really dug its claws into the Windows operating system, a move the really set it on a path to facing anti-competitive flak from the both the US government and the European Union.

By version 5 (March 1999), Microsoft had refined Internet Explorer to a large extent and, having defeated Netscape, enjoyed a virtual monopoly on the market at around 95 per cent.

Version 6 (August 2001) was released just prior to Windows XP and extended Microsoft's dominance. However, this led to a clear period of complacence, during which IE became infamous for a number of security issues. It wasn't until October 2006 that version 7 appeared. In the mean time, Mozilla Firefox rose from the ashes of Netscape and with other competitors, such as Opera, began to bring innovation back into the frame.

With Firefox now with enjoying a 21 per cent market share, Microsoft has some serious motivation once again. IE8 has been in development since August 2007 and two versions of the beta have appeared in 2008. Now, the final version has arrived and Microsoft is claiming that it brings with it a host of new improvements.

Straight away we can safely say that we're impressed. As you use the product you will find that Microsoft has made an attempt to add some genuinely useful features. Sure, many of these ape what's already available to the Firefox community, but that doesn't take away from the fact that at least Microsoft has implemented them.

After you install and run IE8, the first thing it asks you to do is set up some of its new feature, such as web slices and accelerators, which we'll explain further down. What's clear though is that Microsoft's has clearly been forced to be more open to the world outside Microsoft while its services are the default, a list of alternative providers is clearly presented and it's easy to just choose the one you want.

First impressions are that Microsoft hasn't visually made any radical changes over version 7 and it doesn't have any high impact features like the grid display of pages that you get with Chrome or the sleek curves of Safari.