VoIP phones could bring significant cost savings and flexibility to your business. We take a look at one of the latest enterprise calls SIP handsets from Polycom. 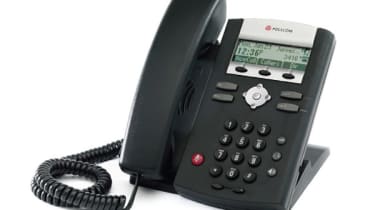 You probably don't take that much notice of your office phone. Aside from a few key combinations - perhaps to access voicemail or perform a group pickup, it sits there waiting for users to dial out, or receive calls.

Yet the humble office phone has been undergoing a quiet revolution of late. More organisations are moving from traditional PBX networks to voice over IP and, as equipment is upgraded, more and more features are being offered to users. The trouble is, most have no clue how to access these features, and IT department investment in systems designed to make life easier is either wasted, or having to train employees properly.

The answer, of course, is to buy equipment that rather than being difficult to use, is super straightforward, and it's in this category that PolyCom's SoundPoint IP 330 sits. It's one of the easiest phones, VoIP or not, that you're ever likely to use.It's clear, 102 x 33 pixel monochrome LCD screen is central to this ease of use, and it's coupled with a very intuitive control system. Beneath the screen are three soft buttons enabling you to access menu items on screen, while a directional pad with a select button in its centre allows navigation of lists and options. Altogether, it means that accessing advanced features (from voicemail, through adding numbers to the phone's directory), and setting up different ringtones for different contacts is an absolute doddle.And the rest of the phone is just as straightforward to use, with all the buttons labelled clearly in plain English - something you can't say for every office phone. Complex keystrokes and number combinations are a thing of the past with the SoundPoint IP 330. Build and sound qualityOffice phones aren't glamorous, but they do need to be solid and reliable, and on this count the Polycom also scores highly. With really solid built quality throughout, this phone feels like it'll take years of angry, frustrated employees slamming the receiver down on the cradle. Other thoughtful touches include a reversible base attachment that lets the phone to be deskbound or wall-mounted, plus a 2.5mm handsfree headset jack.One of the few negative aspects of the 330 is that we felt the numerical keys could have been a little larger - it's possible when quickly jabbing out numbers for your finger to slip off or miss its intended target - but the buttons do have a robust yet solid response that feels as if it'll last and last.The SoundPoint soon gets back into its stride, however, when you pick up the receiver and start talking. Sound quality is absolutely superb, but it's the speakerphone facility where this unit really shines; in fact, it's among the best we've used on any office phone. This unit could quite happily find a home in medium-sized meeting rooms. It's so good it almost seems a waste to consign it to someone's desk, where the facility will be rarely used.