The business of technology in Formula One

As the F1 season kicks off this weekend, we take a look at some of the business technology that lies behind the success of world champion Lewis Hamilton’s team - Vodafone McLaren Mercedes. 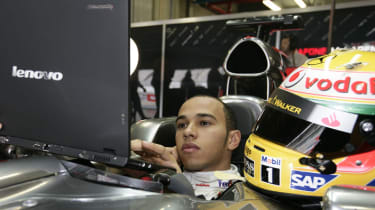 No field of human endeavour demonstrates the wish to achieve excellence more than sport. So often it is strength of will and a desire to win that separates the winners from the losers something that British sport has often learned about the hard way.

But last year Lewis Hamilton showed the way with a consistent and determined approach that saw him take the Formula One championship on the very last corner of the very last race of the season, making for the most exciting finish in the sport's history.

In all areas of sport, science and technology are being used to push the boundaries of what is possible to gain that competitive advantage and no sport is more closely linked with technology than Formula One.

Fiona O'Brien is head of Lenovo's Centre of Excellence, which focuses on the alliances with its partners and explained to IT PRO why Lenovo is so keen to be associated with Formula One.

"Formula One's popularity at a global level is very strong it's a good fit from a business perspective. Sport in general is evolving in our use of technology for training, but Formula One is very dependent on it for constant innovation," she said.

"The sport uses a huge amount of IT to gain competitive advantage teams have to analyse thousands of data points and that gives us a great platform to showcase our products."

But does Lenovo's involvement with the Vodafone McLaren Mercedes team go further than just a logo on the car?

"What we do really goes across the whole of its business. We had to provide the best technology for them at the pit lane and the pit wall. They use our workstation laptops, our workstation desktops and a whole variety of monitors the monitors are wall to wall it's stunning!"

The team also requires thin and light computers, which is catered for with four models.

"Our X200 is a standard issue thin and light machine, while the X301, complete with optical drive is given to the more senior members of the team," O'Brien said. "The T400 is deployed across the business and also we have our W500 workstation laptop with heavy discrete graphics."

While it's mostly a standard deployment for Lenovo, O'Brien did reveal that not all machines are standard issue and require some tweaking to meet the demands of the environment and a lot of it has to do with the power of the car's V8 engine, which in 2008 was capable of revving up to 19,000rpm.

"The vibrations [by the car] are phenomenal just amazing! We have a sensor on our laptops that monitors the hard drive and when it detects movement it park the heads to prevent damage to the drive. However, because of the vibrations we had to desensitise it, while still ensuring it didn't compromise data integrity."

In terms of support, Lenovo's involvement is a little more involved than standard business deployments. They always have a team on site to ensure that things go smoothly. "We need to be there to be sure there are no glitches," said O'Brien.

Another issue that's key in Formula One is security with a team's data being the life blood of its success it's vital to keep it safe. It's of particular concern for McLaren Mercedes, which was found guilty of acquiring Ferrari data illegally a couple of seasons ago.