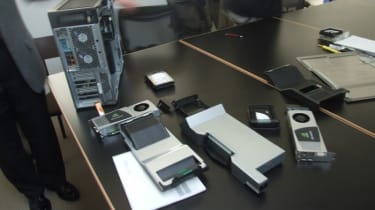 With much fanfare, HP has unveiled its Z-Series line of workstations based on Intel's Xeon 5500 Nehalem' chip.

"The Z-Series is destined to be a rock star," said Jim Zafarana, general manager for HP Workstations at the global launch event, held in California on the premises of its design partner BMW Designworks USA.

"Performance matters and we knew [Intel's] QuickPath technology was a fundamental change in the industry," he added.

Three new models are on offer - the single socket entry-level Z-400, the dual-socket mid-tier Z-600, and the high-end no-holds-barred Z-800. Zafarana said the Z-Series contained more than 20 design innovations, which the company is protecting with patents. He highlighted the new systems benefits in three areas, performance, power usage and design.

For performance, he said the top of the range Z-800 employed dual Intel 5520 chipsets in order to allow for 12 DIMM slots, giving a potential of 192GB of 1,333MHz DDR3 memory to be fitted to a single box.

Kirk Skaugen, general manager of server platforms for Intel said the new 5500 chip, "could be one of the most significant ever". He said that with its integrated memory controller it offers 2.4 times the memory bandwidth of the previous generations front-side-bus based design.

Skaugen also detailed the chip's Turbo' mode, which boosts the clock speed of the chip up to 3.2GHz, while turning the other cores off, in order to gain maximum benefit from single threaded applications.

Zafarana said that the Z-Series now consumes up to 35 per cent less power than the previous generation HP workstations when in idle mode and two per cent less power when running full pelt. This was thanks to the BIOS taking advantage of the different levels of power states built into the Xeon 5500 processor, which it is able to move in and out of them five times faster than previously.

When running at full power, Zafarana claimed the workstation could deliver performance increases of between 50 to 500 per cent, depending on the application.

In terms of design, Zafarana said the workstation was designed to be opened up, "with the one tool we carry with us all of the time - our hands," stating that no one would end up with bleeding hands trying to open up the system.

Terry Pilsner, vice president of HP's workstation R&D team, told the audience that the system was designed to be exactly the same size as previous generation of HP boxes, in order to help customers integrate the new models.

This proved a challenge as the Z-Series now features handles to make them easier to move, a feature added thanks to user feedback. Pilsner pointed out that the workstation was covered in green touch points that indicate where a user can interact and remove a component. To demonstrate, he pulled out the entire power supply just by pulling a handle.

The new power supply now runs the length of the system from front to back in order to pull cool air from the front of the system. This is intended to make the system more reliable due to more effective cooling and also quieter. It also now features a green light that indicates whether the PSU is operating correctly, helping to reduce engineer call out costs.

The Z-800 also supports dual graphics cards from either Nvidia or ATI. Intel branded solid state discs will be offered as a storage option from May.

The Z-Series was designed by BMW Designworks and according to Alex Bernstein, senior director to BMW DesignWorks USA, the aimed was to focus on both interior and exterior design. "You want to design things properly inside and out."

The design team fought hard to ensure than the sides of the system were created of pressed aluminium and steel rather than plastic, ensuring a high end, "pure premium" look and feel.