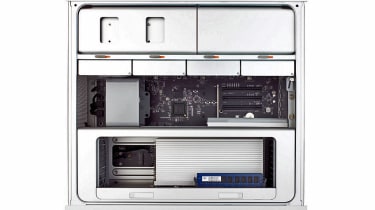 It's fair to say that any Apple products that comes through IT Pro's doors brings with it unfairly high expectations. We expect top-level industrial design, world-class performance, and, of course, a giddying price.The core specification of the newest Mac Pro did dampen our hopes. At its heart lies a quad-core Intel Xeon W3520 running at 2.67GHz, helped by 3GB of 1,066MHz DDR3 RAM. The 45nm processor is based on Intel's Nehalem architecture, and as such is fresh out of Intel's fabrication plants, boasting all the features of the new Core i7 CPUs such as Turbo Boost and Hyper-Threading. It also has an integrated memory controller, cutting the time it takes for the CPU to access system RAM. If a quad-core isn't enough for you, a two-socket, eight-core system is available too, though for a 538 premium.Unsurprisingly, even the quad-core made spectacularly light work of our benchmarks, producing an overall score of 1.88. Even this doesn't tell the whole story. The Mac Pro's four cores pack an almighty punch when it comes to multitasking: you could use Adobe Premiere Pro in the foreground, while rendering a project in the background and still have spare horsepower for Outlook, Word and more besides.The rest of the Mac Pro's specification is similarly uncompromising. The 640GB Western Digital hard disk provides more than enough space for a full install of Adobe's Creative Suite 4 with plenty of room remaining. And, with a spin speed of 7,200rpm and 16MB cache, data bottlenecks should be kept to a minimum.There are only a few disappointments. The first is the lack of Blu-ray: on such an expensive, top-end PC, it's strange not to see something that now appears on some sub-1,000 laptops. And stranger still when you consider that the Mac Pro is easily powerful enough to edit HD video. The other peculiarity is the graphics card: the Nvidia GeForce GT 120 is fairly humble and Apple does not offer Nvidia's professionally minded Quadro cards as an option.