Apple has finally updated its flagship 17in model with its unibody design. It’s a looker alright but how does it fare for performance and value? 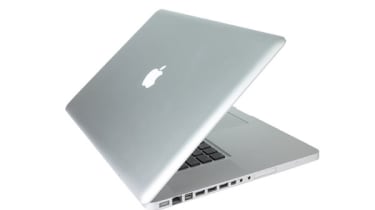 Apple's products are some of the most divisive and compelling in the industry, so it's no surprise that the 15.4in MacBook Pro prompted plenty of debate. The good looks, solid design and build were offset by a number of niggles: some disliked the scrabble-tile keyboard, others baulked at the non-removable battery, and plenty didn't approve of the unusual button-free trackpad.

For all the fuss back then about aluminium construction and button-less trackpads, though, the most striking feature of the new 17in MacBook Pro is more traditional: the screen. It's not an RGB LED panel, but traditional white LED technology. No matter: the screen is remarkable, with fantastic colour range, accuracy and clarity.

You can do plenty with it as well, thanks to the 1,900 x 1,200 native resolution. It's the highest currently available on a portable, and offers significantly more space than 1,680 x 1,050 screens. It's a close-run thing, but if multi-tasking and perfect colour reproduction are vital to you, then the Apple's screen is unbeatable.

The screen is bordered by the same classy black surround as the 15.4in MacBook Pro, and Apple's focus on good design and sturdy build quality is evident throughout. The famed 'unibody' construction, whereby the laptop is crafted from a single block of aluminium, has resulted in superb build quality: there's no squashy wrist-rest or unnervingly flexible lid here. This quality is matched by the minimalist style that is now the norm for Apple notebooks. From any angle, this is a good-looking laptop.

The trackpad remains both the main innovation and bone of contention in usability terms. As with the 15.4in model, our first few minutes saw us constantly attempting to click the bottom of the pad, where the mouse buttons would ordinarily be. Instead, the mouse pad itself functions as one large button, with several 'multitouch' functions available in specific applications, and other controls for navigating OS X more easily: swiping four fingers horizontally, for instance, is the OS X equivalent of ALT-TAB. Swipe four fingers up and your open applications glide to the edges of the screen to reveal the desktop. Inevitably, the gestures don't work in Vista, although a two-fingered click brings up context menus.

The keyboard uses the scrabble-tile layout also seen on Sony's VAIO laptops, but we're not entirely convinced. While the base of the keyboard is solid, the keys themselves are a little flimsy and lack travel. The under-key LED is a useful addition, however, for typing in the dark.

As with the 15.4in MacBook Pro, the ports are grouped on the left-hand edge. The 17in MacBook Pro gains a USB port over its 15.4in sibling, bringing the total to three. You also get Gigabit Ethernet, FireWire 800, audio in and out, an ExpressCard/34 slot and a Mini-DisplayPort output. When compared to almost any rival, however, the MacBook Pro's offering seems stingy. There's no eSATA, for instance, and a few more USB ports wouldn't go amiss. The lack of a standard display output is also an annoyance: a converter from Mini-DisplayPort to DVI costs 17 before VAT; a converter to Dual-Link DVI costs an extortionate 68 before VAT.