Nexsan’s SASBeast is capable of offering a truly monstrous storage capacity at a very competitive price. 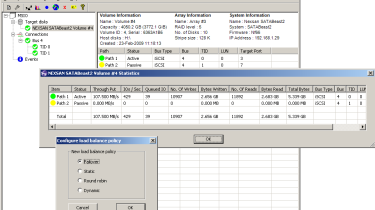 The demand for network storage continues relentlessly. But in today's tough economic climate businesses are looking long and hard at their choices to see how they can satisfy this appetite but reduce costs substantially.

The big vendors in this sector have always preferred being presented with a blank cheque book but Nexsan's latest SASBeast storage array - as our exclusive review shows - aims to provide enterprise-level capacity and performance at a more sensible price.

The SASBeast has a huge capacity as this 4U chassis has room for 42 hard disks with the review unit supplied with a full complement of 300GB Hitachi 15k SAS drives. You can implement different tiers for performance and capacity by populating the chassis with combinations of SAS and SATA drives and Nexsan is currently running a buy 2 get 1 free' promotion on SATA drives until 15 June.

This remarkable drive density is achieved by employing a horizontally mounted controller board with combined SAS/SATA and power interfaces on it. The drives come with rails already fitted so you simply drop each one vertically into the cabinet using the plastic guides. It's a simple enough process and we had the cabinet fully populated inside thirty minutes.

Both hot-swap RAID controllers are equipped with 2GB of cache memory plus battery backup packs and support multiple RAID0, 1, 10, 4, 5 and 6 arrays. You have both IP and FC SANs available as each controller has a pair of 4Gbps FC ports and two Gigabit iSCSI data ports. Fault tolerance is in abundance as no component in the chassis represents a single point of failure.

Four system modes are available where you can use each controller as an individual element with no redundancy. You can also set them so that volumes can be mapped to all four ports or combine them together as active/active partners with either two or four data ports presented. The two-port active/active mode does not require redundant paths on host systems.

Nexsan's AutoMAID (automatic massive array of idle disks) reduces power consumption during idle periods by using time schedules to park disk heads, reduce spin speeds and spin them down. We tested this feature with an in-line power meter and set the head parking time at two minutes and spin down at fifteen minutes. We were unable to select the second option as the Hitachi disks still don't support this feature.

Initial consumption was measured at around 900W and when head parking came in this dropped to 840W. A further fifteen minutes later and spin down was instigated causing the power draw to fall significantly to 655W. Drives are powered back up sequentially to avoid any power surges and when accessing a quiescent array from our host we could see no appreciable lag when the drives came back up.