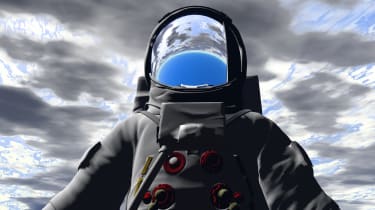 The science fiction version is much more impressive, the best example being the holodeck virtual reality areas seen in Star Trek and the Red Dwarf hologram Rimmer, powered by a light emitting device.

In real-life, we haven't hit the stage of having a volumetric display device' a graphical display device in three dimensions - used in day-to-day life.

The next best thing that we could definitely see in the near future is 2-D projection created by mobile devices.

Mobile companies are already working on this, and devices that are capable of projecting images could be a huge step up from the camera phones that are so ubiquitous now.

A flying vehicle that could be driven like a car in the air has not yet been a reality, crushing the fantasies of many small children.

When seen in science fiction, the method of propulsion is never explained, and this is probably why a real-life version of a flying car would never get off the ground, so to speak.

However, driverless cars seem much more of a possibility, with a lot of research done on its potential.

This is probably a long way in the future though, considering our reliance on self-driving cars in the present.

Usually involving Mars, many science fiction stories involve people travelling to other planets and spaceships without the need for specialist astronautical training or even breathing equipment.

It's not quite walking on Mars, but in 2009 space tourism is becoming more of a reality thanks to the increasing possibility of tourists being able to fly into space with commercial space ships being built specifically for that purpose.

Start up companies have sprung up in recent years, hoping to create a space tourism industry out of the possibilities of affordable sub orbital tourism.

One of these is Virgin Galactic, which hopes to offer opportunities for people to fly into space without huge amounts of specialist training. Currently it costs hundreds of thousands of pounds, but Virgin hopes the cost would at some point go down.

As seen in: Back to the Future

One of the highlights of the Back to the Future series is Michael J Fox as Marty McFly using a hoverboard - that is a skateboard that could fly using the same basic principle as a hovercraft.

Unfortunately, in real-life scientists have never fully found a way to transfer the technology from a working hovercraft to something as small as a hoverboard, although arguably for some this is the technology that people of a certain age wanted the most...