We review the latest educational PC on the block, the Fizzbook Spin. 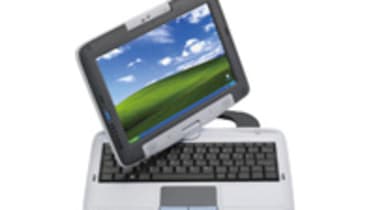 The ideal of one laptop per child (OLPC) and the $100 portable never did come off, but in the meantime, Intel's Atom coupled with the legion of netbooks spawned by Asus' original Eee PC has steadily been working its very own revolution.

According to some estimates, netbooks already represent 20 per cent of the UK laptop market. After just a year and half in existence, the concept of cheap laptops for classrooms hasn't entirely died as a result. In fact, Intel has kept the fire burning in the shape of its Learning Alliance programme, and the result last year was the launch of the Classmate PC, a netbook aimed solely at children. It may not have hit that magical price tag, but it was a step in the right direction.

This second Classmate takes the idea even further, turning the original, almost literally, on its head. Dubbed the Convertible (known as the Zoostorm Fizzbook Spin in the UK) it holds to the same principals as the original. It's robustly built, has been drop tested from 50cm and boasts a splash-resistant keyboard. You still get that rather funky flexible rubber handle (complete with name tag panel) curving away from its spine to help reduce the number of accidents while it's being lugged around the classroom.

And the core specifications also veer little from the well-trodden netbook path: a nine inch, 1,024 x 600 screen, a 1.6GHz Intel Atom N270 providing processing power with 1GB of RAM to back it up, and though the 60GB hard disk drive doesn't seem that generous, we were pleased to see draft-n wireless in place instead of the 802.11g netbook staple.

The difference is that the Convertible, true to its name, can be turned from plain laptop into a tablet. Swivel the screen around on its single hinge and fold it back, flat against the base and kids can use this versatile machine to draw on and write notes with the stylus, or simply poke and prod with a finger. Intel hasn't simply added a swivel hinge and touchscreen to the existing design, though - a good deal more thought has gone into the implementation than that. More so, in fact, than with many more grown-up tablet designs.

The first notable feature is that this netbook boasts an accelerometer, which means it can sense its orientation, just like an iPhone. In tablet mode it will flip the screen around so that, whichever way around a child wants to hold it, the screen will flip itself the right way up.

The second is the user interface: just like the original Linux-based Eee PC, the classmate has a simplified interface (EasyBits' Blue Dolphin), complete with big, proddable graphical shortcuts that whisk you off to commonly used applications and settings. Kids will still have to resort to using the stylus for most applications, but if they get lost or confused a blue home button, thoughtfully set into the bezel of the screen, takes them back to the main, icon-based Blue Dolphin desktop.