Ferroelectric states could be the way forward for next-generation memory devices. 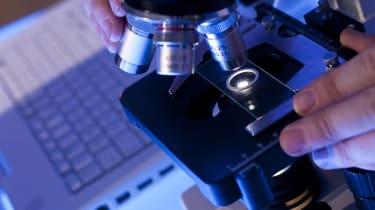 Data loss during power outages and time-consuming boot-ups may go the way of the vacuum tube if a new form of "instant on" electronic memory can move from the laboratory into the marketplace.

By deliberately squeezing a common oxide, strontium titanate, onto silicon in a carefully controlled pattern, researchers from several American universities have discovered they can make its atoms enter a state known as ferroelectric a result that could prove key to developing next-generation memory devices.

The breakthrough was revealed in the journal Science late last week.

Ferroelectric materials already are used today in the smart cards found in transport and corporate security systems. Materials inside the cards can switch in an instant between different memory states using very little electric power. A tiny microwave antenna inside each card reveals and updates stored information when waved before a reader.

Materials scientists long have wanted to use ferroelectric materials to make transistors capable of handling "instant-on" computing, but no one has managed to make a ferroelectric transistor that works. The research published in Science indicates such devices may now be possible.

"The technological implications are staggering," said Jeremy Levy, professor of physics and astronomy at the University of Pittsburgh, who provided the measurements that showed the thin strontium titanate layers on silicon are ferroelectric.

"Adding new functionality to transistors can lead to improved computing and devices that are lower power, higher speed and more convenient to use," he said. "Several hybrid transistors have been proposed specifically with ferroelectrics in mind. By creating a ferroelectric directly on silicon, we are bringing this possibility closer to realisation."

Normally, strontium titanate is not ferroelectric. But by depositing it in a thin film of just a few atomic layers directly onto silicon through a process called molecular-beam epitaxy, the researchers could squeeze each atom slightly closer together, altering the material's properties.

"Changing the spacing between atoms by about 1.7 per cent drastically alters the properties of strontium titanate and turns it into a material with useful memory properties," said Professor Long-Qing Chen of Pennsylvania State University.

Chen and other scientists predicted several years ago that such a change could be possible, "but it took our team years to achieve and demonstrate the predicted effect," explained Prof. Schlom.