Is the latest smartphone in Nokia's Eseries a business force to be reckoned with? 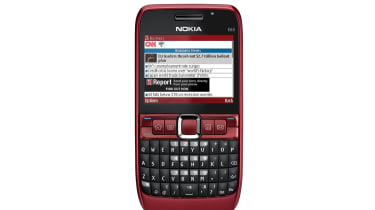 Our first impressions of the latest in Nokia's Eseries device line-up was more "So what?" than "Wow" and we've certainly seen more impressive handsets to tempt the business person's eye.

The review unit we got to test out was dark blue but the handset is also available in red, which is more the sort of colour one tends to associate with school pencil cases for some reason rather than briefcases. We doubt many business users will therefore be demanding the latter hue.

On the big screen

We were pleasantly surprised by the E63's screen. At 2.36in, metrics alone dictate it's not going to be much of a crowd pleaser. But, in reality, the screen is more than adequate and dominates the handset's outer shell. While a fairly low resolution, we also found the display to be very crisp and bright.

The QWERTY keypad features raised keys, with pads that are sensitive enough to respond but aren't so OTT as to react when you've accidentally stroked the wrong button.

Those with larger-than-average digits may also find the size of the keys a bit irksome, particularly for the speed texters out there who are used to typing without even looking at the keyboard.

It's obvious to see that the E63 is clearly related to the E71. Although, based on the previous observations about colour, we felt it wasn't as classy in appearance as its older sibling which could put some professionals off.

Call quality is good and, as with most Nokia handsets, the E63 is well built and finished, and feels solid in the hand. The E63 also has a good built in speaker and, as much as any speaker of that size can be deemed "good" it ticks the right boxes.

The handset also feels a bit beefier - at 6cm wide and 128g in weight than the E71 but it doesn't necessarily pack in that many extra features to explain the additional bulk.

That said, messaging (whether texting or email) is a good experience using the device.

Ease of use is a key focus for the E63. It's based on the same platform (Symbian) and menu system as other Nokia smartphones, meaning if you've owned a Nokia smartphone before it doesn't take long to get to grips with phone's functions. Also with Nokia's Windows-esque desktop icons to access the phone's many functions, even new Nokia users will find it very easy to navigate.

Surfing the web was pleasant enough too, thanks to the largish screen. Although it's better suited to regular snacking on website rather than full blown meals. HSDPA is also noticeable by its absence, which is something many business users are like to lament the loss of.

Thankfully, Wi-Fi is on the menu, which should please users who find themselves out of the office en route to meetings or stuck in airport lounges. Set-up in general is easy, and we found it very easy to connect to available Wi-Fi.

Talking of easy set-up, we found email a doddle on the E63. That was a pleasant surprise, although the basic visual format was a tad disappointing.

GPS is also a no-show, with Nokia Maps onboard instead. Although the latter has its merits, GPS would have been a bonus for for business users who go to meetings outside of their comfort travel zone a lot.

QuickOffice can also be found lurking around the Symbian OS, meaning users can access basic office-based documents on the move. And with 110MB memory onboard and support for microSD storage, business users should find it easy to move documents around provided they keep file sizes down to a respectable level.

The camera is a lowly 2 megapixels, although photo quality is reasonable for a basic phone-based snapper. And, to be fair, it's unlikely that anyone will be purchasing the Nokia E63 specifically for its camera prowess. It's also important to remember that the iPhone's camera spec isn't that magnificent but that hasn't put people off buying it.

When you compare the E63's camera specs to the E71, which had a 3.2 megapixel snapper, it does make you wonder why it fell by the wayside but it's something business users are likely to be happy without for the sake of the rest of the package.

RealPlayer is the preloaded media player, making the E63 quite capable of playing a film to a high enough standard to watch as entertainment in between meetings, on a plane, train or just an out-of-work scenario altogether.

All in all, it's clearly the E63 is likely to be going after traditional BlackBerry fodder. It should definitely have some success, although those who've moved onwards and upwards to newer models without keyboards may not have their heads turned so easily.

The Nokia E63 is a nice phone but is not outstanding in any of its functions. That said, the features are adequate enough for most early adopters or average business users. While the E63 is unlikely to set the world on fire, it is likely to find a warm place in the hearts of many business users and consumers alike.