Lenovo’s X300 rocked our world when its sleek, slab-like form appeared last year. Can the follow up, the Lenovo X301, do the same? 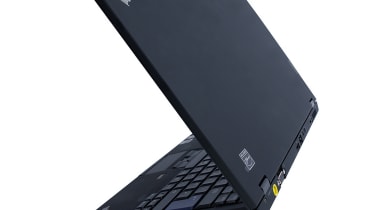 With all the talk of netbooks, anyone would be forgiven for thinking that the fully fledged ultra-portable laptop had died a death.

However, netbooks are, after all, produced on a budget, and if your company has the resources, then a real computer is still the way to go especially if it still manages to be highly portable as the Lenovo Thinkpad X301.

Its predecessor, the Lenovo ThinkPad X300, was a breath of fresh air when it was released early in 2008: a sub-1.5kg laptop that somehow included a sizeable screen and optical drive.

Now, just over a year later, we see the next step in its evolution. There are no fundamental changes with the X301, just nips and tucks designed to make it better suited to life on the move in 2009.

The first enhancement is the processor, with the 1.2GHz SL7100 in the X300 replaced here by the 1.4GHz SU9400. Coupled with 2GB of RAM (there's one DIMM socket free), it returned 0.78 in our benchmarks, compared to 0.67 from the X300. Truth be told, we'd hoped that Lenovo would opt for a faster processor still, but undemanding users can certainly use the X301 as their main system.

Another nice evolutionary touch is the DisplayPort that graces the X301's rear. The D-SUB still found on most laptops is starting to show its age, but many manufacturers held off switching to DVI - in part because of its limited resolution support.

DisplayPort has no such worries: you can connect screens right up to 2,560 x 1,600 with the X301, and still benefit from a digital connection (including audio). That said, Lenovo plays it safe by also including a D-SUB connector.

We're a little disappointed that Lenovo hasn't seen fit to squeeze in an eSATA port, sticking instead with three USB connectors: two on the left-hand side, the other at the rear.

Aside from this, there are only a pair of mic and headphone jacks plus the Gigabit Ethernet port; digital camera enthusiasts should note the lack of flash memory card slots.

They should also note that Lenovo hasn't improved the screen. Just as with the X300, this LED-backlit affair is neither the brightest or most colour accurate of panels, and you have to position it just so - at a 100-degree incline - to get perfect contrast.

The 1,440 x 900 resolution is about right for the 13.3in screen diagonal, but we wouldn't have complained if the resolution had been higher still - or if Lenovo had found a way to increase the screen size at the expense of the rather wide bezel.

We're also just a shade disappointed by the keyboard. It seems odd to bemoan its quality when this remains one of the best designed key layouts you can find - note the large Enter key and the well separated navigation keys (e.g. Home, End, PgUp, PgDn) - but it doesn't have the glorious feel of the best ThinkPad keyboards. And, dare we say it, it's just a shade rattly.