We take a look at some of the most popular Twitter apps for mobile phone platforms. 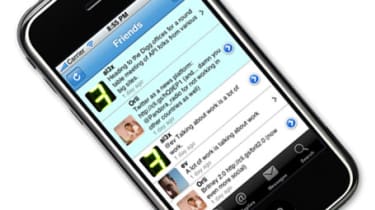 It took a while to reach critical mass, but once it did so, the speed with which Twitter seems to have taken over the world has been impressive.

Even those who don't use it seem to have an opinion about it. Indeed, most people fall into one of three categories: those who love it, those who hate it and those that just don't get it.

Although the majority of people use Twitter for social purposes, its business use is widespread. More and more companies are appearing on Twitter all the time to advertise their products and services, and it won't be too long before companies are monitoring the terms used and directing promotions directly at users.

Back in early February, we offered a guide on how Twitter can be used to help your business.

As more and more devices offer better screens and faster internet connectivity, being away from your computer need be no barrier to Tweeting. Indeed, mobile connectivity lends itself to the immediacy and spontaneity of Twitter.

So for those who want to be ahead of the curve we've drawn up a list of our 10 Twitter apps for mobile platforms. Of course you can view and reply to Tweets on your mobile via SMS, although the constant beeping could prove intrusive and unmanageable and the steady flow of messages expensive. A native phone client is an easier way to view your followers 140 character pronouncements.

The iPhone's App store means there's a plethora of choices, but we've listed just four. As you'll be hard pushed to find many for Windows Mobile we've just listed two, while Blackberry, Series 60 and Android get one each, leaving two cross platform options.

There are two versions a free ad-supported one and an ad free one that costs $9.99. The layout is simple and clean and you can see Bio info or post a picture to Twitpic using the iPhone camera and it uses the iPhone 3G's GPS functionality to pinpoint your location good for letting your followers know where your shop is.

Twitterfon is a good rival to Twitterific and also features a simple clean interface with a good range of useful features. You can easily see what an '@reply post' was in fact replying to, bringing context to conversations. Messages are also laid out conversation style, enabling you to follow them. Meanwhile, another screen lets you reply, send a direct message and retweet, while different colours also enables you to easily see the difference between read and unread messages.

Tweetie is touted by many as the best Twitter app on the iPhone, though unlike Twitterific it's not free; it costs $2.99 from the App store. Top of the feature list is its responsiveness, which is something you'll soon get used to. Everything you'd expect to find is built-in, such as the timeline of messages and access to replies.

Interesting features include the built-in mini browser, so you can view links without loading Safari, auto compression of images before sending to TwitPic and a built-in search feature great for finding out who's been Tweeting about you or your company.

Twitterlator, which must be Governor Arnie's favourite Twitter app for iPhone, has a good range of features in both the free version and also the paid for one that costs $4.99.

With the free version, you get a decent layout and essential features as well as unique ones such as a Panic Button', that sends out a pre-filled Tweet with your location requesting help. The paid for version adds niceties such as letting you view TwitPic photos within the app and a range of skins. You can also flip between multiple accounts, which is useful for switching between company and personal identities.