Apple’s Xserve gets an early makeover with Intel’s new 5500 Xeons, but is it still the classiest rack server on the planet? 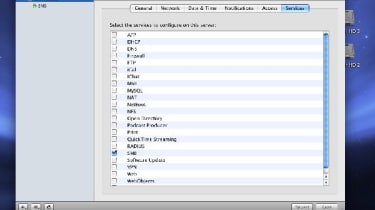 Since Intel launched its latest Xeon 5500 family of server processors at the end of March Apple hasn't wasted any time joining the Nehalem' club and in this exclusive review we bring you a first look at its latest Xserve, which comes equipped with the new Xeons.

When we previously looked at the Xserve we observed that Apple's switch from PowerPC to Xeon processors was relatively painless and made swifter by the fact that it didn't have to redesign the 1U chassis. This still holds true for the latest Xserve as absolutely nothing has changed, but then there's no real need to as it's still one of the best built chassis on the market.

Plenty of status LEDs are presented at the front, with indicators for general system health and both network ports, whilst each drive carrier has its own status and activity lights. Two banks of eight LEDs show processor activity and these also come into play during system start-up as you use them in conjunction with the system ID button to choose a boot-up method.

The Allen key at the front enables the lid and drive bays to be locked down and this also disables all the USB ports. For storage, the drive bays support both SAS and SATA hard disks and the price of the review system includes a triplet of 1TB Western Digital SATA drives.

Apple claims this triple drive bay arrangement is industry leading as it reckons most 1U servers can only support two 3.5in drives or four 2.5in models at most. We have to disagree as most 1U rack servers can handle three or four 3.5in drives and IT PRO Editor's Choice winning Dell PowerEdge R610 supports no less than six 2.5in drives.

The optional RAID controller was also included and is implemented as a new drive backplane complete with processor, 512MB of cache memory plus battery backup and support for RAID0, 1 and 5 arrays. If you don't go for this option you can use software RAID as Apple's Mac OS X Server can handle mirrors and stripes. An interesting option is Apple's 128GB SSD, which can be used as a high performance system disk. Its small form factor enables it to be installed inside the chassis so it doesn't lose a standard drive bay.

For further storage expansion Apple had replaced its elderly Xserve RAID option with the new Promise VTrak E-Class disk arrays. These connect to the Xserve via optional fibre-channel adapters and support both SAS and SATA hard disks. With sixteen hot-swap drive bays up for grabs there's plenty of room to grow and they include dual active/active controllers although 11,500 for 16TB of SATA storage is comparatively pricey.