There's no doubt that LaCie makes the coolest looking storage products, but can its boxes measure up for performance, feature and value? 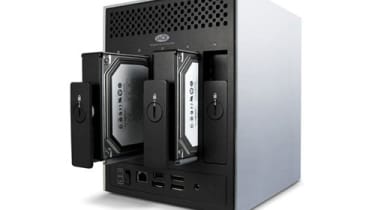 When you initially connect the 5big, it will attempt to obtain an IP address from the DHCP server, but there's a discovery wizard you can run if it fails. There are two ways to manage the 5big, either using the web interface, or the Network Assistant application. The interface is as clean-looking as the device itself, which makes it easier to navigate the menus and make changes.

The 5big supports up to 25 concurrent users (with a maximum of 100 accounts), and it's easy to create shares and assign privileges to groups or individuals. Only one user can be administrator. You can set which protocols can be used to access each share, from SMB, Apple, FTP or HTTP. This basic access is fine for small groups of users, but you can attach the 5big to a domain. We tested this under Vista and had no problems logging on to a share.

Unlike Synology's Disk Station DS508, the 5big isn't endowed with scores of extra features. Its one frill' is the inclusion of a BitTorrent client, which enables you to download files without leaving another computer switched on. Aside from this, you can view the device's status remotely, and there's a built-in SMTP server, which can email alerts to a designated address. If you want IP camera surveillance, a print server and numerous multimedia features including an iTunes server, the DS508 is a better choice.

The 5big's power management isn't as good as we'd hoped for. Despite the USB port, there's no support for a UPS and auto-shutdown. There's also no facility to automatically start up after a power cut. You can only reboot the 5big or shut it down from the management interface if the power switch is set to auto. The wake-on-LAN support only works via the Network Assistant.

Performance also wasn't quite up to the standard we were hoping for. Compared to the Disk Station DS508, the 5big was much slower at transferring large files, writing at 12MB/sec and reading at 24MB/sec. It read small files at 11MB/sec and wrote them at 6MB/sec. Switching from RAID 5 to RAID 0 saw these speeds increase between 1 and 5MB/sec.

LaCie’s 5big is a striking looking NAS which could take pride of place in any office. It’s easy to use and very quiet. Additional storage capacity is easily added via external disks, but backups aren’t compressed or encrypted. Performance and power management are the other weak areas, making the DS508 the better choice for most people.