Sun Microsystems joins the Nehalem club with a powerful 1U rack server that offers some unusual storage features. 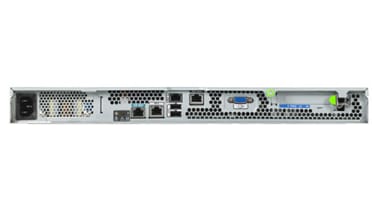 Oracle's recent acquisition of Sun Microsystems may have surprised many but it does give it the ability to deliver complete end-to-end solutions with hardware that now pits it against previous partners HP and IBM. Whether it goes down this route remains to be seen but as the fourth largest server vendor, Sun certainly brings a lot of impressive systems to the table.

The Sun Fire range of Intel and AMD based servers is extensive and in our exclusive review of the latest X2270 we see Sun delivering support for Intel's new Xeon 5500 processors and ahead of HP and IBM.

The X2270 targets a wide range of applications and projects such as HPC and web services and the review system was delivered with a pair of 2.26GHz L5520 modules. These processors represent the entry point of the 5500 family that support Intel's Hyper-Threading and Turbo Boost technologies. They also have a low TDP of 60W, support DDR3 memory speeds up to 1,066MHz and have a QPI speed of 5.86GT/sec.

From the front, the X2270 doesn't look as interesting as Sun's impressive X4140 as it only supports a quartet of 3.5in. hot-swap hard disks. However, the target market is unlikely to need the eight SFF hard disks offered by the X4140. Only SATA drives are supported on the X2270 and the price for the review system includes a single 500GB drive. SAS may not be on the menu but if you want higher performing storage, and can afford it, Sun offers 32GB SSDs as well.

There are some other interesting storage possibilities for this server as the embedded ICH10R controller provides six SATA channels. None have gone to waste as two interfaces are presented on the motherboard as mini-DIMM sockets, which accept Sun's 24GB Flash modules. These combine 4GB NAND flash chips and a Marvell flash memory controller and appear to the BIOS and OS as standard but very fast SATA hard disks.

With the lid removed, the X2270 presents a simple but very tidy interior and to accommodate the two L5520 processors and their hefty heatsinks, with the sockets staggered down the motherboard. Each processor is accompanied by its own dedicated bank of six DIMM sockets and the price includes a total of 12GB of DDR3 memory.

All components are, of course, linked together by the high speed QPI (quick path interconnect), which allows each processor to swiftly access the memory bank controlled by the other. In theory, it's possible to upgrade memory to 96GB but bear in mind that 8GB DDR3 DIMMs probably won't be available until 2010.