Nokia’s E75 is designed to make the business life of professionals easier on the move, and out of office. However, does it have what it takes to usurp the reputation of the Blackberry as the professional’s device of choice? 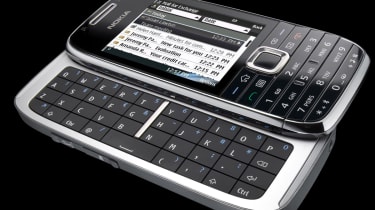 The arrival of both the Blackberry and Apple's iPhone range have revolutionised the very concept of smart phones, solidifying their presence and quickly establishing them as necessities for any professional requiring perfect "out of office" office solutions.

So, with this in mind: How does Nokia's latest eSeries shape up against the competition?

On first impressions, the E75 isn't really much to look at. The design is rudimentary, with the only stand out feature being the QWERTY slide out key pad. Besides this, there is very little to get excited about aesthetically, and one could easily be forgiven for mistaking the phone for an older model such as the N78 or the 6500 Classic.

That being said, many business-oriented users may prefer this minimalist design, which offers functionality over looks.

Once out the box the phone itself feels both resilient, sleek and sturdy in the hand. The E75's dimensions are 14.4mm x 11.8mm x 50mm, making it about average size for a smart phone; although, being half a centimeter shorter would make it a far more comfortable fit in your pocket.

Its screen is 2.4 inches, which isn't going to drop any jaws, but is ample enough for what this phone sets out to do.

The use of 16 million colours in conjunction with its LED display creates a clear and crisp screen, which makes reading e-mails, texts, web pages, and even downloaded documents a pleasure.

Once you get the menu up and running, you have all the important things (e-mail, office, contacts, and calendar) on display straight away. There's also a useful menu bar, providing short cuts to maps, messaging, and media, on the display screen, which can also be edited to your preference, for direct access to your core apps.

Another interesting feature is the ability to switch the phone between business and personal modes, which theoretically eradicates the need for two phones. Whether this is actually the case though would require a longer testing period.

Setting up e-mail on the E75 (we used a Gmail account for this) was a breeze. It took, literally, less than 90 seconds, which was a huge relief as we've had some bad experiences attempting the same thing on other devices such as the N95.

Once the e-mail capabilities are set up, the E75 really comes into its own, making good on its promises to provide you with a quick and effective e-mail service for when you're out of the office.

The QWERTY keyboard, while quite fiddly, makes the whole process of sending longer e-mails easier, which is one of the E75's stronger points. The functionality of it, after some initial practice, enables a quicker and more intuitive response that some may prefer to the iPhone's touchscreen method.

Our main grievance with the QWERTY key pad, bar its fiddly nature, is that you have to hold down the shift key when inserting numbers, which is extremely annoying, and very time consuming, ruining the flow of an otherwise attractive feature.