The quick Firefox (and Google) updates over the slow Apple and Opera. 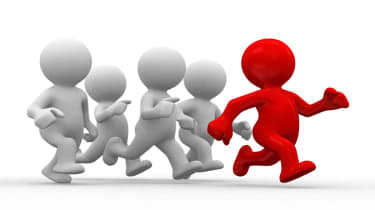 Apple and Opera reportedly lag behind their browser counterparts when it comes to issuing browser updates, according to research.

Boffins from Google Switzerland and the Swiss Federal Institute of Technology (ETH Zurich) studied anonymous logs on Google's own web servers. The aim was to identify what version of browser visitors to Google's pages were using, and revealed that users of Apple and Opera were most often found to be running out-of-date versions.

The final report, Why Silent Updates Boost Security', found that just over 45 per cent of internet users were not using the latest version of their browser when visiting Google web servers, prompting the researchers to warn about the security dangers this presents.

"If people keep using an outdated Web browser version with known vulnerabilities, they can easily fall victim to any of the millions of malicious Websites that execute drive-by downloads to infect the visitor's computer with malware," they explained.

The two browsers shown to have the most up-to-date users were Mozilla's Firefox and Google's Chrome. For example, June of last year 83 per cent of Firefox users were running the latest version of the client. However, Chrome's 'silent update' method of rolling out patches, which the user cannot disable, proved to be the best method of ensuring security, and after its release in September last year, the update mechanism was used as a benchmark against which all others would be judged.

So while Chrome was applauded for looking for updates every five hours, unfortunately for the others, their updates require some user intervention. Opera's system is cumbersome and requires a lot of administration, according to the researchers, while to update Apple's browser the user must first update their operating system. Neither approach particularly impressed the authors.