Key issues on Britain’s treatment of e-crime and the surveillance of its people were high on the agenda at London’s recent Infosecurity show. 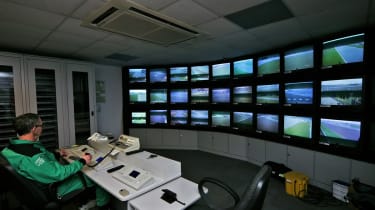 The enforcement side looked to be going smoothly, but there was still a feeling that e-crime was still not understood by the world at large, and that people generally didn't know its full impact.

There was also criticism that businesses weren't doing enough to stem the tide of criminality, and instead wrote off fraud as acceptable losses'.

Mike Humphrey, head of information assurance and accreditation at the Serious Organised Crime Agency (SOCA), admitted that he's been a victim of credit card fraud.

He was impressed about the way that the credit card provider got him a new card, then asked himself questions about whether he had any recent transactions, doing his own investigative work thinking where he could have been where it could have been cloned.

"I was expecting a questionnaire," he said. "But I never got anything to confirm that I was victim of a scam and I was disappointed that there wasn't any thought about the criminality of it."

He said that service providers had perhaps got too complacent about this type of fraud, which the Police e-Crime Unit will look to investigate in the future.

Britain as a police state?

Perhaps one of the most worrying talks to come out of this year's Infosecurity event was by Phil Zimmermann, one of the co-founders of data encryption company PGP.

Zimmermann believed that the UK had a pervasive surveillance culture with video cameras everywhere that now had the power to track and recognise people.

And he claimed that too much surveillance is having an impact on society, where people should generally feel at ease to express themselves in non-conformist' ways.

"We're not going to do that if we feel we are constantly being watched and reported to later be evaluated and criticised," he said.

Zimmermann said that the only way that it was possible to deal with technology encroaching on privacy was by citizens pushing back and saying "enough".

"There's not enough of that in the UK," Zimmermann said. "There's a kind of culture of surveillance here where there is a complacency in allowing this pervasive technology to incrementally rise, year by year."

There are organisations that work against this rise in surveillance, such as FIPR, which is trying to push back against the National ID Card scheme.

A situation in France was referenced, where the public fought back against wheel clamping by super gluing the locks the scheme was then abandoned.

"In France you have a public that fights back, and I've always been impressed by the fact that the riots and protests are about very mundane things like pay scales, or wheel clamping," said Zimmermann.

"If the French can do something with wheel clamping, why can't you do it here?"

Zimmermann thought along the same lines as David Blunkett when he said that the police needed public policy to prevent them from doing anything they liked such as the review of RIPA.

When he talked about the dangers of what a surveillance state could be, he used the example of China, which he said took surveillance technology from other countries and made it "cheaper and more efficient."

He added: "Once you build something like that, it becomes completely stable and difficult to dislodge."

Zimmermann said this wasn't the case in Britain, but he warned that if ever there was a repressive government that came into power and had control of surveillance technology, they had the potential to be in power permanently.