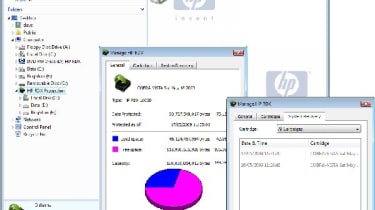 Iometer reporting a 26MB/sec average read throughput but real world speeds were slightly slower - copying a 2.52GB video clip returned read and write speeds of 25.8MB/sec and 20MB/sec. The RDX is compatible with any backup software that can work with removable drives and we tested with EMC Retrospect. Securing a 13.5GB test folder with nearly 15,000 files in it returned a much lower write speed of 7.5MB/sec.

The closest tape device in terms of price is the DAT72 although even the USB 2.0 model costs over 100 more and only offers a native 36GB on 4mm tape cartridges. We installed a USB external model on the server to compare performance and backing up the same test data using Retrospect saw the DAT72 deliver a paltry average speed of just under 3MB/sec.

The RDX was also superior to tape for restore operations. Using Retrospect we restored a single Word document near the end of the backup selections, which took 90 seconds for the DAT72 the RDX did it two seconds. It's also worth noting that, unlike the old NTBackup Windows utility, Vista's built in backup tools do not support tape drives.

The kit comes with HP's CDP (continuous data protection) software, which does precisely what it says on the tin. Once installed, it asks for a cartridge to be loaded, whereupon it proceeds to back up all partitions on the host system. From this point on, it automatically backs up files as they are created or modified and creates a separate partition in Windows Explorer from where you can view secured data and carry out drag and drop restorations.

The RDX currently has very little competition in the SMB removable hard disk market with only Imation's Odyssey and EMC's Iomega REV putting up a fight. The Odyssey does cost less but in both cases neither Imation nor Iomega can match the higher capacities of the RDX and both are proprietary. The big advantage of the ProStor RDX technology is that it has a much higher industry support, as along with HP it's also offered by IBM , Dell and Tandberg Data.

The RDX is an innovative removable media solution that looks a far better alternative to tape for SMB backup operations. HP ought to offer a SATA version as that would perform better than USB 2.0, but even without, it’s much faster than equivalent tape drives for backup or restore operations and far more affordable.