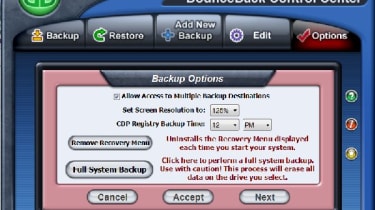 It's all straightforward: we were up and running with a fully-working, bootable backup in under two hours, including the time taken to create the first backup. But there are a few drawbacks. The first is the design of the software, which looks like an edutainment application with its massive buttons and clumsy graphics.

We reviewed the end-user application, and for a per seat licence cost of 50 excluding VAT you don't get anything in the way of corporate controls. If you want to monitor your user's backups you need to buy CMS' advanced IT Console program, which creates an SQL database to keep track of users' database statistics. For those with less advanced needs, you can at least set BounceBack to backup over a network.

The second problem is the cost per seat. BounceBack Ultimate is more expensive than its competitors Norton Ghost costs 45 and the excellent Acronis True Image 2009 costs 34. BounceBack Ultimate is potentially more useful if you want minimum downtime: a constantly-updated, reliable USB drive that will load straight into Windows could be invaluable.

There's still plenty to be said for image-based backups, though. They're easier to move around (moving one large file is faster than moving many small ones) and can be compressed to take up less space. And, applications such as Acronis allow you to create recovery CDs that will reload a disc image, although unlike BounceBack Ultimate, you can't run them live. It all comes down to the ability to boot straight into your backup if this sounds like heaven, BounceBack is a great choice.

Plenty of flexibility and power, plus the welcome ability to load your recovered system from a USB drive. Bounceback Ultimate will have great appeal for many users, though it's a touch more expensive the rival image based solutions.