We take a look at Asus' new touch-screen, swivel-screen netbook computer, the T-91. 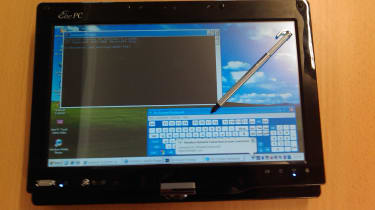 Near the beginning of the century, Bill Gates declared that the tablet PC would would become the most popular type of portable computer in the next five years. As we all know, they haven't, which means of course that he was wrong, which is sort of comforting for the rest of us.

The point was the we would all enjoy the benefits of accessing a computer via touch and pen interfaces and that machines with swivelling screens that turn and flatten would become all the rage.

In fact, one of the main problems with most tablet PCs - or at least one of the problems - is that they were simply too big and heavy, which meant that walking around with them was just too difficult.

Therefore, this latest machine from Asus could herald a resurgence of the concept. Combining a tablet style twisting screen with a lightweight and small netbook makes a lot of sense - and that's what Asus has done with the T91. The concept makes even more sense when you consider than Windows 7, which has touch 'built-in', is relatively just around the corner.

As Windows 7 isn't available yet though, Asus has gone with Windows XP. On top of this, it will run its own custom touch interface. Unfortunately it wasn't able to delight us, as this software wasn't installed on this early sample machine, which demotes this to First Look rather than a full review.

Nevertheless, we can see that the touch display is accurate as the basic touch functions work even with vanilla Windows XP, although admittedly in this raw state there's not much point to it. A stylus is stored on the underside on the right of the machine, but the touch function works equally well with just a finger.

Fingermarks around the rest of the unit will be less welcome though, as Asus has decided to dress the machine in a black plastic that really shows up finger marks - if you're a proud owner you'll need to have a cleaning cloth on standby.

The 8.9in display is encased in a sizable bezel and inside this Asus has placed a webcam at the top and a microphone. Asus has also moved the power light, hard disk activity and wireless indicators to the bottom of the bezel itself, as well as the power button. There is also a button for rotating the screen round, though it was not functioning as shipped to us.

The diminutive size of the T91 does mean that turning the screen round and using it tablet style does feel right, and as it weighs only 954g according to our scales, means that it will be comfortable to carry round and use in that manner for an extended period.

If you're not used to using a netbook, then you're certain to get a shock from the small keys, but after a while I did manage to build up a reasonable typing speed.

Performance for general light use seemed adequate, but no more, which isn't surprising considering that there's just a low-power Z520 Intel Atom CPU powering the T-91. Running at 1.33GHz this is the slowest of Intel's offerings. It's backed with 1GB of RAM though.

Storage is provided by a 16GB SSD drive, which makes sense considering the portability of the machine, but doesn't give much scope for flexibility.

We didn't have time to run a full suite of our benchmarks, but we will be doing next week for the full review. We also plan to see how this machine will cope with Windows 7, and will be installing that too. We did squeeze in a light use battery test - and four hours 19 minutes is respectable if not outstanding, but as the two-cell battery is not removable there's not much you can do about it.

From first impressions it looks like Asus has a winner on their hands, but we'll wait until we get a chance to use a version with the full touch software, and complete our full benchmarks before reaching a definitive conclusion.

Asus looks like they have once again moved the netbook forward with this neat looking machine, but we'll wait for the final version before we make a final verdict.