Top of the flops: 10 pieces of tech that died before they’d lived

We run down some of the key tech inventions of our time that didn’t last the distance. 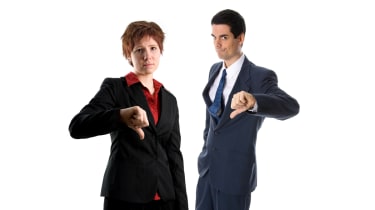 The internet provides a free medium for people to host videos, stream data, and download films. Therefore, making money of something that people can already get for free, both on their televisions and computers, is a big ask.

Microsoft, confidently rose to the challenge when Bill Gates purchased Web TV Networks in 1996, hoping to anticipate a huge trend. However, this time round it wasn't to be, with MSN TV receiving very little attention from the public. Bizarrely, MSN TV still receives funding.

Possibly one of the strangest inventions known to man, Digiscent's Personal Scent Synthesizer iSmell, was originally developed to enhance web users' experience through the introduction of another human sense. The device contained a cartridge with 128 primary odours that could be mixed to replicate natural or man-made odours.

Unfortunately, the ability to smell things is not a high ranking requirement for internet users. This miscalculation resulted in iSmell creating more of a bad smell than the sweet smell of success, as well as being voted one of the 25 Worst Tech Products of All Time by PC World Magazine.

Keen to muscle in on the weird and bizarre world of online virtual environments, Google launched Lively.

Lively, whilst enjoying moderate success, struggled to stand out from the competition. Similar online environments, such as Second Life, had a larger, more dedicated user base and even allowed people to buy and sell things in their virtual worlds.

Google finally pulled the plug on Lively in July 2008, posting the following statement in a blog: "We've always accepted that when you take on these kinds of risks not every bet is going to pay off."

In the wake of 9/11, any technology that could potentially combat terrorism, from hand-scanning at Disney world, to ID cards in the UK, would certainly be a sound investment.

Facial scans were tipped as the next big thing, being pitched for both airport security as well as great biometric tools for business. However, there was one problem: They didn't work very well. And this debate is likely to go on for some time.

DIVX was essentially in the DVD rental business. But, you could only watch each rental once, before it destroyed itself. If you wanted a second or third viewing you had to pay for the privilege, which is good for combating copyright infringers, but perhaps quite rubbish as a business model.