Moving to VoIP based telephony doesn’t require having to use weird and wonderful handsets – we look at the reassuringly safe looking Aastra 673i. 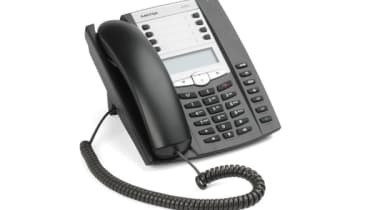 Voice over IP may be state-of-art technology in many office environments but the vast majority of users will still prefer the comfort of a conventional handset rather than having to use a PC and headset.

Aastra's 6731i is a mid-range VOIP phone with a typical set of features. It features a speakerphone and support for up to six SIP lines, with XML support and an Ethernet pass-through that means you can connect your PC to the network via the phone. There are also eight programmable keys on the phone.

It lacks a standard headset port but you can connect a headset instead of the usual receiver, but you can't have both together.

Unfortunately, unlike the majority of VOIP phones, the 6731i doesn't come with a power supply as standard from most retailers, so unless your phone system users Power over Ethernet (PoE), you'll have to buy Aastra's 48v power supply unit (16 inc VAT from Voipon), which brings the total cost of the phone up to 104 inc VAT. Alternatively, the 6730i, at 75 ex. VAT is available with a power supply).

A pair of feet clips securely into place to position the phone at one of four angles. All positions raise it off the desk at a fairly steep angle, and the receiver often slipped off its cradle when we tried to replace it. However, without its feet, the phone doesn't sit comfortably on a flat surface.

The receiver plugs into the base of the phone, with its cable threaded through a narrow channel. As with most VoIP phones, getting it securely seated in position can be a bit fiddly, but the phone's upright position means that a poorly seated cable won't interfere with its positioning. The three-line LCD screen is set just above the numeric keypad. It can't be repositioned, but was easy to see from most angles.

If you want to wall-mount the phone, it comes with a pair of screws, two rawl plugs and a drilling template printed on a sheet of A4. Unfortunately, the clip that holds the receiver in place when wall-mounted was extremely difficult to remove from the phone. We had to use flat-headed micro-screwdriver to remove it, which left gouges in the phone's plastic casing. However, once rotated into the correct position, the clip held the receiver securely.