At 256GB, Samsung's latest SSD solves one of the bugbears of solid state technology for client machines - capacity. But can it also deliver for performance and value? 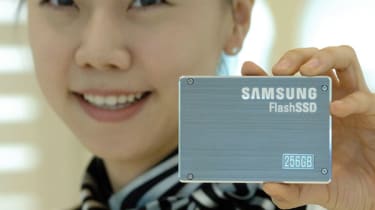 While solid-state disks have always been attractive options because of their lightning speed and infallible reliability, it's only now, thanks to the ongoing march of technology, that they're becoming viable options for everyday use in PCs and laptops. With prices falling and capacities increasing, this 256GB Samsung model is one of the first we've seen to offer a capacity large enough for use in the average laptop.

While it may share the same SATA connection that every mechanical hard disk uses, SSD drives are built much differently to their disk-based cousins. While all SSD drives eschew traditional disks for DRAM memory, similar to the sort used in computer RAM or memory cards for digital cameras, this is an MLC-based drive, which comes with a couple of specific differences when compared to SSDs built on SLC technology.

While SLC drives are heralded as being longer-lasting and more reliable than MLC drives because they only store one piece of information per cell, MLC drives can store multiple pieces of data per chip and, consequently, can deliver a higher capacity.

This particular drive offers a capacity of 256GB which drops to 232GB when formatted using NTFS under Windows Vista. It's the largest SSD drive Samsung has ever produced and has an enticing list of specifications. With claimed sequential read and write rates of 220MB/s and 200MB/s respectively using the standard SATA 3Gb/s interface, the performance boost over a conventional spindle disk should, in theory, be dramatic.

Accordingly, our theoretical tests, run in two popular benchmarking applications SiSoft's Sandra and Simplisoftware's HDTach proved the gulf in class between the Samsung SSD and a standard laptop hard disk - in this case, a 5,400rpm Seagate Momentus 5400.4.

Sandra, for instance, measured the read speed of the Samsung SSD as just over 202MB/s compared to 49.6MB/s from the Seagate. HDTach's more in-depth tests highlighted several different statistics: the SSD's random access time of less than half a millisecond easily outpaced the 15.5ms access time of the traditional hard disk, for instance, and the sequential read speed of the SSD was, at 103.5MB/s, twice that of the Momentus. The only area where the two disks had similar performance was in burst speeds, with both around 145MB/s.