We take a quick look at the HD version of the popular Samsung Omnia to see what it offers the average business user. 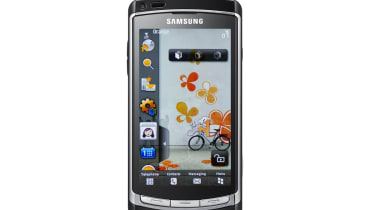 The original Samsung Omnia and i8910 HD (Samsung Omnia HD) may share the same name - before the new numbering system took hold that is - and they may even look like siblings, but that's pretty much where the similarities end.

While we thought the original Omnia had a lot of potential, it was held back from getting a 6/6 rating - receiving 4/6 instead because applications didn't load as quickly as we'd have liked, the touch screen had a few quirks and the stylus that had to live separately from the device due to not enough room at the Omnia inn.

But, from what we've seen of the i8910 HD thus far, the future looks a bit more promising. For starters, Windows Mobile has been ditched in favour of a Symbian S60 v.5 interface.

It's a pleasure to use. We must admit it took us about a minute to get our heads around the navigation, but that's more to do with the fact we got a bit giddy and started pressing everything, rather than the actual phone being at fault.

Once we'd stopped being so trigger happy, we found the bright interface incredibly intuitive. Icons are a great size not too big or small and vibrantly coloured against the black back drop of the wallpaper and the handset itself.

Widgets are back with a vengeance, making the whole user experience feel akin to the desktop and ensuring you can quickly and easily access your favourite shortcuts.

Applications loaded within one to two seconds with the odd exception, but this speed is by far superior to the lag we experienced with the original Omnia.

Quickoffice (word processing, spreadsheets and presentations) is also on board, which should come in handy for viewing documents on the move. While it's no laptop, the big screen certainly makes document activity a bit less of an eye strainer.

There's also an Adobe PDF reader, a dictionary, calendar, conversion tool, and note pad, as well as a compass and the usual suspects such as a calculator, FM radio and 3D games.