Is the search for the ultimate tablet machine over? We take a look at the finished version of the Asus Eee PC T-91. 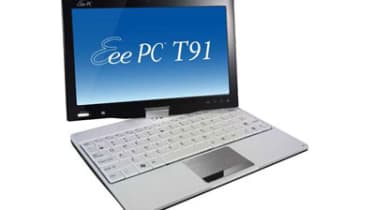 Our Windows 7 experiment also was something of a disappointment as though it installed the new operating system would not recognise the T-91's graphics drivers. This meant it would not display the desktop at native resolution, which knocks on the head anyone's plans of buying this machine and upgrading to Windows 7 straight away.

Even in this state though it did bode well, as the Windows 7 on-screen keyboard proved to be superior to the one included with the Asus' notepad application as it's much larger and easier to use. The fact that it pops up automatically when you tap in a text field is useful too.

The Asus T-91 is clearly an intriguing piece of technology but it does have a couple of major flaws. The first is that whatever you're doing it feels just a bit too slow, which is a real problem for touch screen application. For it to be better than using a keyboard it needs to be quicker, and there's just not enough raw power here. The touch screen also lacks responsiveness and we found that we often had to tap a couple of times to get it to react. Thirdly, the touch layer affects the quality of the screen itself, giving it a mottled grainy look.

To test performance we tried to play some 720p video content but found that whatever we tried caused the machine to crash to a blue-screen. Standard definition material did play, but even this was not completly smooth.

After all of this, the price of 500 is just too expensive. Clearly Asus feels it has a unique selling point, but the touch functionality essentially doesn't work well enough to justify the outlay.

The Magic Desktop is a good example of that - it's going to be a fun way to educate and entertain kids, but is it worth 500 per desktop?

Ultimately, it's probably not. If Asus can lower the price, this would be worth considering and usability could do with a boost too. This then, isn't the very usable tablet that we were hoping for but rather just another positive step along the way.

It wins an extra point just for being different but only if it cost slightly more than a regular netbook would the touch screen be enough to sway a purchase. However, the performance issues and and the reduced battery life over conventional models mean that at the price we don’t think the T-91 is worth the extra outlay.