Carry two mobiles phones? Now you can use two SIM cards in one phone with the first dual-SIM mobile in the UK - the Acer DX900. 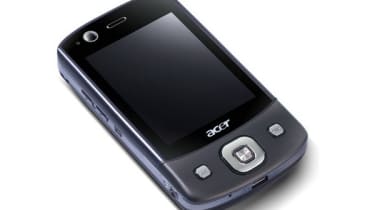 Swipe right again and there's the menu with icons to launch you into different sub menus, such as multimedia, programs, settings and organizer. You can also access this screen by tapping on the second icon at the bottom of the homescreen.

When you select anything in SPB mode, the sub menus are simple to use, presented in list form that you can scroll up and down by swiping your finger up and down the screen, just like HTC's TouchFLO 3D interface.

The Acer DX900 comes with a number of handy software additions, including a business card reader (simply take a photo of a business card and it will extract the data and insert it into your phonebook), Location SMS to add latitude and longitude data to your SMS text messages and Satellite Data to improve the response times of the inbuilt GPS. You also get an easy keyboard', which is an additional keyboard that adds to the standard Qwerty, handwriting recognition and T9 keyboards you'll find on a normal Windows Mobile device.

Acer hasn't yet discovered the joy of fingertip operation, meaning the stylus has to be used thanks to tiny keys that are sometimes too tiny to even tap with the included stylus.

The default browser you'll find on the Acer DX900 is Internet Explorer 6. It's not the simplest implementation we've seen, especially when combined with the fiddly keyboard.

In contrast, internet access is speedy thanks to 802.11b Wi-Fi and HSDPA on your master SIM card. It does become a little irritating though if you want to swap to using the 2G enabled slot to access the internet, because you'll see considerable speed cuts.

Now we come to the real problems of the Acer DX900. Battery life can only be described as abysmal. On standby, it'll last for hours rather than days, and if you're talking on the phone a lot, you'll be astonished at how quickly the battery diminishes.

Another quirk is the lack of memory. With only 256MB of ROM and 128MB of RAM, it's scarcely enough to power a single-SIM device, let alone one with double usage.

Sometimes the Acer DX900 does stumble and crash, something that has always been an issue for Windows Mobile phones, but more so with this one that struggles when a call comes in. It's almost as if the device has to concentrate hard like a human to decide which SIM is being contacted.

The Acer DX900 is pretty handy if you normally carry two mobiles around with you. It has it quirks like most devices, but hopefully other manufacturers will learn from Acer’s lead and start to produce more dual-SIM devices with better usability and battery life.