It’s the announcement we’ve all been waiting for with bated breath, but what exactly is the iPhone 3G S and should you get one? 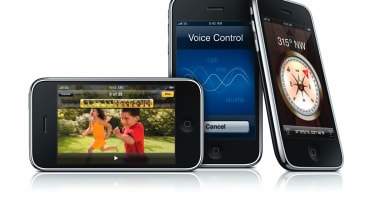 Apple today finally laid the rumours to rest by confirming that a new iPhone, the iPhone 3G S, is just around the corner, claiming the device will be back bigger, better and faster than before this time around.

What exactly is the iPhone 3G S?

First off, the 'S' stands for 'speed' which, although short and to the point, is not as exciting as some of the names we've all made up. The iPhone 3G S is Apple's third generation iPhone, following in the blood line of greatness that brought us the iPhone and iPhone 3G in 2007 and 2008 respectively.

What's so special about it?

According to Apple, the iPhone 3G S is its "fastest, most powerful iPhone yet." It will also be running the new iPhone 3.0 operating system (OS), which will open its doors to the wider world of iPhone users on 17 June.

Sounds marvellous, but what does that actually mean to me?

Supporting up to 7.2 Mbps of HSDPA connectivity, the new third generation iPhone is apparently twice as fast as the iPhone 3G which, for those of us who've used said device, is pretty fast indeed.

That means you can enjoy email attachments 3.6 times faster than you do now, launch applications much more quickly and do everything else in a more hare than tortoise-like way - think of all that extra spare time you'll have.

Couple that with increased battery longevity and you'll be able surf the web for longer, as well as faster, and take advantage of the handset for work and play for a bigger chunk of time before you need to plug in your new friend for charging.

Indeed, Apple reckons you should get six hours of Wi-Fi, five hours of 3G talk time and 10 hours of 2G talk time. Not really to be sniffed at.

Thanks to the new OS, users can take advantage of more than 100 new features including MMS and cut, copy and paste, in addition to Spotlight Search and a landscape keyboard orientation that pops up in the right places. It's music to our ears, if not long overdue by industry standards.

That should come in very handy during my 9-5, but what about the weekends?

Don't worry, Apple hasn't forgotten its iPhone consumer roots and has served up a handset that should please both individuals and businesses alike.

There's a three megapixel camera built in, which offers not only auto focus, macro focus and tap-to-focus tools, but whizzy features such as video recording.

Talking of video recording, the iPhone 3G S apparently makes it easy for people to record high-quality clips, that they can edit there and then using their new device by trimming' where they want the clips to begin and end. Sounds like it might be one of those things that are easier said than done, so we're keen to try it out as soon as possible to test the theory out.

The OpenGL ES 2.0 standard is also harnessed on the iPhone 3G S to bring 3D graphics to life and make mobile gaming, for example, even more fun for users.

Voice control is also on the menu, serving up hands-free control of both phone and iPod functionality. In practice, that means being able to call people more quickly or commanding your music player to play what you want to play and when simply by telling it to do so.

There's also a so-called Genius feature that allows you to order the device to play more songs of the same ilk, pause, stop or shuffle your tunes or question it as to whose dulcet tones are in your ear at the time.