Netgear delivers a much needed upgrade to its ReadyNAS rack mount appliance and adds some interesting backup features along with way. 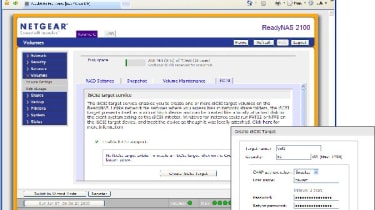 The new ReadyNAS 2100 confirms Netgear's focus on small businesses and aims to improve on the aging 1100 model with a claimed doubling in performance, support for IP SANs and a greater choice of data protection options.

The 2100 has a number of tricks up its sleeve that aim to give it an edge over the competition. First up is its size as although it fits in a 19in rack it's only 12in. deep. Next is the chassis' modular design as the motherboard and power supply are in a separate unit that mates with the hard disk back-plane and can be easily removed and replaced.

The 2100 sports a speedy 1.1GHz Intel SoC (system on chip) teamed up with 1GB of 800MHz DDR2 memory. The USB port count remains the same at three but the pair of Gigabit ports support load balanced and redundant link teams. Four hot swap drive bays are laid out across the front and Netgear has redesigned the drive carrier release mechanism as the push buttons on the older ReadyNAS models have an annoying habit of jamming if not used for long periods of time.

The chassis exhibits the same industrial strength build quality as Netgear's desktop models but we were disappointed with its high noise levels. The power supply has two fans, whilst four more for the chassis sit alongside at the rear making the 2100 far too loud to sit next to you on the desktop.

The bundled RAIDar utility discovers the 2100 on the network and offers a link to the appliance's tidy web interface. This provides a quick start wizard which guides you through setting up workgroup or Windows domain authentication along with shares.