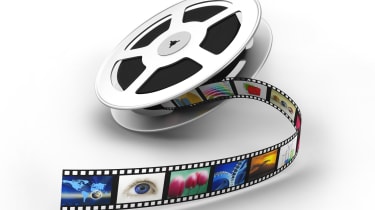 Some movie tech is a bit too sci-fi - it's so insane we'll never see it. But other fictional IT actually exists, in some way, in the real world. Here are some examples of cool technology in the movies, which we actually have now.

The movie: It's seven years old, but watching it today you wouldn't think it. Tom Cruise plays a Precrime' policeman who can predict crimes that happen in the future and stop them.

Based on a short story by Blade Runner writer Philip K. Dick, from a tech point of view one of the most impressive bits was where when Cruise uses a pair of funky gloves to move images and video around on a screen in front of him.

Watching it back he's not exactly touching the screen but he could just as well be.

The reality: For the successful application of multi-touch gestures see the Microsoft Surface and the Apple iPhone.

We all know the iPhone and what it can do. It's actually only two years old, but it feels like it has been around forever. What it has done is force the pace other mobile manufacturers are still trying to catch up to the beauty and simplicity of its multi-touch interface.

Microsoft's Surface is probably easier to compare with what Cruise is actually doing in the film when it comes to gesturing with his hand. Until it decreases in price though it will never be as ubiquitous as an iPhone.

On another note, Microsoft Surface was actually used in the most recent James Bond film Quantum of Solace.

The movie: Among the many cool things in this film was the bit where Morgan Freeman hands Christian Bale a funky looking device that seems to be able to use sonar reading things in the dark thanks to tech normally used in submarines and water.

Watching it you have got to be impressed it looks like it has the tech to outdo the iPhone, and if it can do sonar what else can Nokia's much-hyped gizmo do?

The reality: Well in all probabilities the sonar thing doesn't exist, and is unlikely to. I don't think a programmer will have it in mind when thinking up an app, but there are some weird apps out there.

It also made the Nokia 5800 look like it was at the peak of technical excellence, where in reality it's more impressive as a music phone rather than for touch screen gesturing.

It still uses a stylus for instance forgive me when I believe that Batman probably has better things to do than fiddle with a stylus when trying to send an email with his phone. With his heavy-duty gloves nope, it's not going to work.

The photo zooming in Blade Runner

The movie: There's a scene in Blade Runner where Harrison Ford as Rick Deckard uses a decrepit looking machine to analyse a photo to find the mirror image of a replicant (one of the rogue androids).

The crazy thing about this Esper machine' is that Deckard is able to keep zooming and zooming, changing angles so he can in fact go inside the photo rather than just looking at the surface.

Turning it into a three-dimensional capture of an event, he's able to see one of the replicants.

The reality: Well, within one single photo, it's not possible. Technology hasn't advanced to the stage where a camera can analyse a two-dimensional image and look through' it as if it was three-dimensional.

However, if you're talking about many cameras taking lots of different images, to create an image that you can look at three dimensionally complete with the ability to turn and zoom well thanks to Google Street View we have that.

You could even search for somebody Blade Runner style providing the person you were looking for had his picture taken by the cameras at the exact time the Google car was crossing their path.