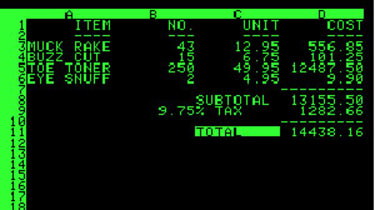 The only two people in the room who weren't somehow connected to the makers of the program left as soon as they realised the talk wasn't actually on finding out undocumented secrets of the TI-59 calculator, the hot techie product of the time.

However, Bricklin did remember meeting one particular individual at the trade-show - a certain Bill Gates, whom he recalled as a, "young kid, best known for his version of BASIC and speeding tickets".

It's fair to say that often ground breaking technology takes a good while to be discovered'. We all know now the significance of the iPod, but Steve Jobs' first public unveiling of the product in 2001 was to a quite audience in a small room, a far cry from what his later announcements would become.

So what was the big deal about VisiCalc? The point was that this was the first useful programme for grown-ups'. And absolutely crucially, it didn't require the user to know anything about computers or programming.

This was a very, very big deal at the time as computers were largely the domain of essentially hardcore geeks who created their own programs and had in depth knowledge of computer languages enabling them to do that. There was little point in spending a lot of time and effort creating a programme to enable a computer to do a task for you, when it would have just been quicker to do it manually in the first place.

VisiCalc was the first program that didn't require this knowledge, and in one fell swoop in turned the computer into a tool for the masses.

One of the few to see the possibilities was Ben Rosen, who was at the time an analyst on the semiconductor industry at Morgan Stanley. He wrote in a report, "VisiCalc could some day become the software tail that wags (and sells) the personal computer dog." And that is pretty much exactly what happened.

The final product shipped for the Apple II in October 1979, and by 1980 the programme was ported to a number of computers such as the Apple III, the TRS-80 and the Commodore PET CBM-80.

It quickly became a success and began picking up awards. Those businesses that bought a computer and used VisiCalc had a genuine competitive advantage and slowly and gradually the rest of the business community began to catch on.

It was some two years later, on 12 August 1981, that IBM released its first personal computer, running Microsoft's MS-DOS and aimed directly at businesses. VisiCalc was the duly ported to run on the new machine and was a launch application described in the IBM press release. "VisiCalc is available for applications ranging from financial analysis to budget planning," it said, making it clear that VisiCalc compatibility was a major selling point for the new machine.