Is Nvidia’s Ion chipset enough to give this netbook real desktop appeal? We examine the first one to come to market. 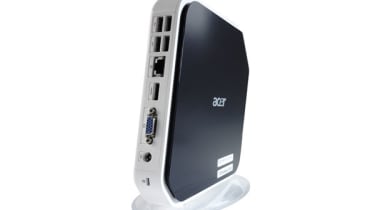 While XP may not be offered as an alternative, Acer has created a Linux edition with a few notable specification alterations. With just 1GB of RAM and an 8GB SSD for storage, it becomes less of a media system and more of a traditional nettop-style web device, but the mouth-watering price of 130 exc VAT makes it an option worth considering very carefully.

Whichever package you choose, the rest of the Revo is the same. Its parallelogram shape is unusual but striking, and the dark blue side panels on a white main body make it far better looking than Asus' sterile plastic approach. It can be attached easily to the back of any standard TFT with VESA mountings, which is just as well as we had major issues with the Revo's stand. It's an oval-shaped piece of plastic with a catch that slots into a matching groove on the bottom of the main body, but even clipped in place it wobbles precariously at the slightest nudge. Go to plug in a flash drive and you have to hold the Revo steady with the other hand just to line up the port.

But that's the only real low point of the Revo's design, which feels sturdy and more expensive than most nettops of this size. Acer couldn't get us samples of the bundled keyboard and mouse for this review, but they're small, portable and white; we can't imagine they'd be of poor enough quality to change our opinion of the Revo. It's worth bearing in mind, though, so you should try them for yourself in a high street store before you buy.

Everything else about the Revo works, and works well. For the most part it's no departure from previous nettops, but that graphics chip makes all the difference to usability and though it's still not suitable for after work gaming, the ability to play back HD video on such a cheap device adds immense appeal.

If that media capability is important to you, the Acer is a better bet than HP's chunkier Compaq CQ2000UK-M, despite the latter's bundled monitor. We should also mention that Asus has launched its own take on Ion - a more powerful Eee Box with an ATI Radeon chip inside - but initial prices are higher than that of the Revo by around 50. This may change, and we'll re-evaluate when we have it to test, but right now the Acer Aspire Revo R3600 stands alone as the first nettop PC we'd genuinely consider buying.

If you want a low cost desktop, then the ‘nettop’ makes a lot of sense. By using Nvidia’s Ion technology, this Acer represents the first genuinely desirable nettop, thanks to an HD-capable graphics chip.