Toshiba has a strong reputation in laptops and its Tecra range is key to that. But does this latest model do enough to keep up with the fast moving pack? 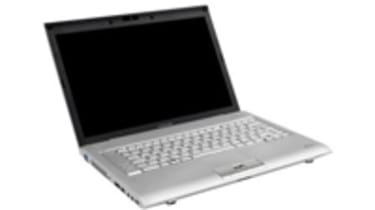 With its range of Tecra laptops Toshiba has carved itself something of a niche for products that are both lightweight and packing enough power to motor through most office applications. This latest model, the R10-10H, looks no different on the surface: a 2.4GHz processor, 4GB of RAM and 128GB solid-state drive make for an enticing recipe.

The processor in question is an Intel Core 2 Duo SP9400 one of the best low-power parts that Intel offers, with a clock speed of 2.4GHz and 6MB of L2 cache despite a tiny TDP of 25W. But, despite the concentration on energy saving, a score of precisely 1 in our 2D benchmarks with scores of 0.76 in our Microsoft Office test and 0.85 in our multi-tasking benchmark suggest that the Tecra can cope with even demanding business software.

The CPU is ably supported by 4GB of DDR2 RAM and that SSD drive. While it's not as big as the 256GB models we've recently seen from Samsung, 128GB is more than enough and should handle both office files and a sizeable media collection with room to spare.

The rest of the specification has been designed for business. Intel's GMA 4500M HD graphics won't be playing any games but they can handle PowerPoint presentations easily without using up unnecessary energy, and draft-n wireless sits alongside a 3G modem which supports 7.2Mbps, so connectivity will never be an issue. The only real business feature missing is TPM.

Toshiba's healthy roster of proprietary software should be welcomed by business users, too. The EasyGuard suite of software includes password utilities, backup tools and hard disk shock protection, as well as a spill-resistant keyboard and a fingerprint reader. Couple this with the bundled antivirus software and numerous other security features and it's clear that, should your Tecra hold sensitive data, you can be confident of it staying safe and protected. There's also a three-year international warranty, which should provide peace of mind for frequent flyers.

The Toshiba's selection of low-power parts mean that, in light use mode at least, battery life is good: when running our less demanding battery benchmark, the Tecra's 5,200mAh power pack expired in 4hr 26m, although this figure dropped significantly in our heavy use test to an hour and a half. It's a decent result, but if battery life is a top priority then other notebooks, such as the Acer Aspire 4810T, last for nine hours and cost half as much.