Nokia showed off its N97 device last night and iPhone lover Stephen Fry was in attendance. 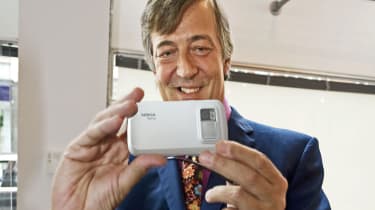 On Friday there will be blood as two industry giants, Apple and Nokia, battle it out for the spotlight for the launch of their new handsets.

Yesterday evening, Nokia showed off its N97 handset, which will be available from its Regent Street store from this Friday. Co-incidentally, that's also the same day Apple has chosen to start selling its newest, shiniest iPhone device, the iPhone 3G S.

And the battle already appears to have started, with a possible celebrity tug of love occurring. Apple devotee Stephen Fry was snapped fondling the N97 curiously at the launch event.

Once of his Twitter following then suggested he should get an iPhone 3G S instead of the 3.5 inch touchscreen/keyboard combo device.

While the N97 will be available SIM-free from Nokia's flagship store from this week, those wanting to get it subsidised as part of a network deal will have to wait until 26 June.

Check back on the site later for our first look review of the N97.