Is Nokia's N97 touchscreen heaven for business users or is it more like hell? More importantly, can it take on the iPhone? 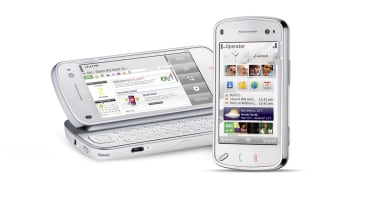 On first inspection, the N97 is quite a pretty phone, if not a tad on the bulky side. With vital statistics measuring in at 55x16x117mm (WDH) and 150g, it's had to sacrifice a little sveltness to pack in the keyboard action.

And it's that keyboard, rather than anything else, that, unfortunately, will leave users frustrated. The spring action is akin to a small Venus flytrap. We caught our hands in it many times.

You've also got to hit the casing in exactly the right spot at an angle to get the keyboard open. Easy when you know how, but annoying when you're finding your feet.

Alas, while the keys are nicely spaced on the keypad, the keys themselves feel a little too relaxed and a tad like they're not really doing anything when you press them.

The touchscreen is inconsistent in terms of responsiveness. Sometimes a light tap is all that's required, while at other times it feels like perhaps a small hammer would be more useful.

At 3.5in the N97's screen is a good size, but inevitably it suffers like most touch screen handsets from finger marks particularly while users are trying to wrestle the keyboard open.

Features for work and play

Moving away from the keyboard, users will actually find themselves presented with quite a splendid features set. Indeed, helpfully, the bumper catch is listed inside the phone for all to see once the keyboard is in action: 32GB, AF 5MP Carl Zeiss, nHD 3.5", A-GPS Bluetooth 2.0, WLAN, 3G HSDPA, USB 2.0, FM RDS.

That 32GB of memory should come in handy for business uses who want to need to carry around presentations and documents with that. Talking of office-based apps, the handset we reviewed did come bundled with Quickoffice, but it wouldn't actually let us use it as it kept saying we needed to purchase a licence but then proceeded to prevent us from obtaining said licence!

It took us a while to work out how to access the phone's main menu but then we accidentally pressed the silver rice-like button to the right of the screen and hey presto!

There's also a handy notes recorder too which could prove useful for work or play.

We didn't get a chance to properly play with the 5MP camera, but we did accidentally use the secondary camera as we accidentally activated it with the keyboard and were greeted with the true horror of what we look like!

What little time we did have to play with the camera, however, showed that it's really good quality and we look forward to trying this out in different environments to put it through its paces.

We did watch some video on the handset, which were great quality. The fact that there's an inbuilt kickstand is a really nice touch making it easier to watch video on a train etc. We'd imagine this could prove useful for presentations and such like too.

Landscape mode comes really comes into its own here. What's more, users can also control the volume either in the traditional hard-buttoned way or by using a virtual volume bar on the touch screen.

Speaker quality was average to good, but we weren't particularly blown away. We found the audio experience much better with the headphones instead.

When it comes to the web, pages rendered nicely with quick loading and scrolling of pages when we tried to view the BBC's website on the handset.

All in all, while we're not overly keen on the keyboard, the N97 does the job you want it to quite well. We're certainly keen to play with it for a longer period of time to bring you a full review of the device.

It's a nice handset and certainly shows innovation on Nokia's part but it's still got a fight on its hands for the iPhone's crown.