Very PC focusses on energy efficient PC, but does its latest machine offer enough for the corporate buyer? 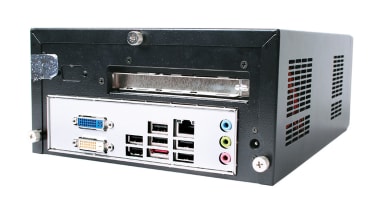 Its first and second machines combined low power draw with plenty of desktop power, resulting in a pair of desktop machines that were at home both in the office and the living room.

The third Treeton, in line with previous generations, ups its game in terms of specification. Where the previous models made do with AMD Athlons, this PC switches allegiances and includes an Intel Core 2 Duo E8400, which runs at a ferocious core clock speed of 3GHz.

That power resulted in a superb benchmark score of 1.73 - fast enough to handle any desktop application with ease - and quicker than the current favourite business desktop of our sister site PC Pro, the Lenovo ThinkCentre M58. The latter scored 1.3 in the same tests and is now available with only a Core 2 Duo rather than the original quad-core processor.

It's a more business-oriented machine than earlier models, although consumer add-ons are available. There's no discrete graphics, for instance, just an integrated Intel chip. The 160GB hard disk isn't large enough for a media-centric machine, although it's perfectly respectable for a work PC. And while the 2GB of RAM included is more than enough to cope with the TT3V's Windows XP Professional installation, it's no headline grabber.

Instead, components have been chosen for their power-saving properties. The hard disk is a 2.5in Seagate Momentus 7200.3, which Seagate claims offers industry-leading power consumption, and VeryPC has chosen a Samsung portable optical drive, rather than a desktop model, for the same reason.

This approach certainly bears fruit. The TT3V consumes just 25W when idle, a couple of watts lower than the previous two Treeton machines we've seen, and undercuts the average desktop PC by a wide margin. When running through our benchmarks, though, the TT3V peaked at 90W - still low by desktop PC standards, but 30W higher than the original Treeton and 15W more than the Treeton II.

The chassis itself bears the familiar "Made in Sheffield" logo, and looks far better than the Treeton II's blue-tinged Perspex front. It's the same chassis that was used for the first Treeton, albeit in black brushed metal rather than silver, and with USB, FireWire and audio jacks on the front and plenty of USB ports, a DVI-I output, Gigabit Ethernet and eSATA on the back it is reasonably well connected. It also feels strong and well built and, as an added bonus, is quiet too.