As Apple’s iPhone 3G S is released, lines once again form outside Apple and O2 stores and IT PRO was there. 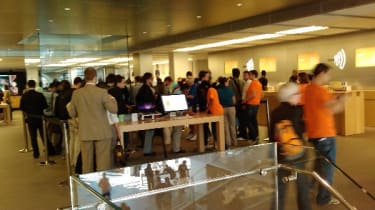 Apple's iPhone 3G S hit retail today, and lines as in previous years, formed outside Apple and O2 stores as eager technology enthusiasts queued up to early in the morning to be among the first to get hold of the new device.

The new iPhone 3G S offers faster speeds, and an enhanced camera that can now record video. Video can also be edited on the device itself and uploaded directly to sites such as YouTube.

IT PRO was in the line at one of the O2 stores on Oxford Street and spoke to several of the eager beavers.

"I'm an early adopter of most things Apple. I've got the original iPhone but I wanted the best one that's coming forward and this is it," said Tony. He highlighted the range of its business applications and its internet capability as his reason for queuing. Despite this he still had his criticisms. "It's not a great phone...it's got a wee bit to go before it beats the Nokias and others for telephonic capabilities I think."

All were clearly happy to pick up the new iPhone, despite the high price.

"On the business tariff, it's not too bad actually, " said Tony.

Rajiiv also had his concerns over the cost, but that hadn't stopped him from queuing early to get hold of one for the first time. "All my friends have it, so I've been curious to get it. I think it's a bit too expensive - it could be a bit cheaper, but the same goes for all Apple products, they are a bit premium priced."