Apple’s new iPhone 3G S is here, and we have one in the hand. Which is like having two in the bush or so they say. 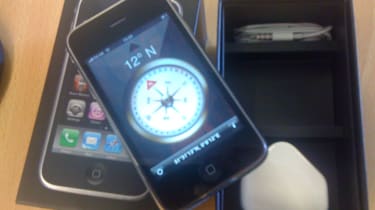 It's becoming something of a tradition this - the build-up to the summer Apple iPhone announcement, the picking apart of the details and the queuing of the faithful at O2 and Apple stores round the country.

The queues were perhaps a lot shorter than last time, perhaps because so many with the iPhone 3G are still locked into contracts but there was still a healthy line at the store this writer found himself in at 8am this morning. By 9am I was out, with a 32GB iPhone 3G S in my palms.

As we already knew, in terms of look and feel the iPhone 3G S is identical to the 3G if Apple intends to make any hardware adjustments, we're going to have to wait until next year to see them.

That means, of course, that the iPhone screen resolution remains the same at 480 x 320, and while that might lag behind the likes of the HTC Touch HD (800 x 480), it's fair to say that there's very little wrong with the readability of the screen.

First things first, the faster speed of the new device over the previous is palpable. Compared to the iPhone 3G we noticed that scrolling round a zoomed in web page was speedier on the 3G S, with less of a lag for the extra bit of the page to load. Page rendering was also appreciably faster.

The calendar popped up quicker and it was easier to scroll round Google Maps. The extra speeds will be most noticeable in the more demanding apps, such as the Google Earth and games.

The connection to the same Wi-Fi access point was also stronger, with a full bar on the 3G S and only two of the 3G.

The next all-new 3G S feature is voice control. Initially, we did wonder how to activate it as the iPhone 3G S material does not include a manual. To activate, you simply hold down the home button and say a name from your contacts and it will dial it without any need to set it up in advance. You can also do the same for music tracks too by uttering the artist's name.

If you have two similar-sounding names, the iPhone 3G S asks you which one you actually want, but we had difficulty getting it to choose the one we wanted. When it works though it's great, and does make you wonder why it wasn't available before and even more so, why it can't be added to previous models as an upgrade.

The new camera is very welcome. That said, aside from the increased pixel size, picture quality seemed similar we'll compare in more depth in the full review. The main improvement came from the new auto focus box with a box appearing on screen that you can tap to focus on a particular area. The video capability is well executed and the trim feature mimics the simplicity of iMovie '09 to highlight and trim sections - only using the finger instead of a mouse. A simple tap lets you send via email, or via another new iPhone 3.0 feature.

While though the iPhone 3G S is an absolutely marvellous phone, the improvements over the iPhone 3G are in reality quite minimal. One could cynically suggest that Apple had kept video and voice control away from the iPhone 3G to give the 3G S more differentiation.

Overall it's the speed that really counts and it gives the iPhone platform real potential for growth.

Look our for our full review later this week.

The best smartphone gets better once again. The faster processor is very much the highlight of the 3G S and makes a great phone even easier and more satisfying to use. Video recording and voice control are useful additions too, but if you've got a 3G and are tied into a contract, then iPhone 3.0 OS will provide enough to keep you going.