A 3D hologram is transmitted across the globe by Musion systems, in what it claims will be be the next generation of telepresence technology. 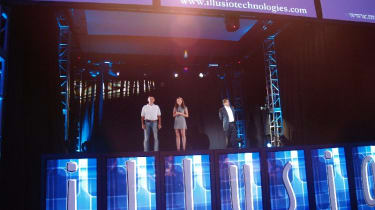 A 3D hologram, as previously seen only in Star Trek and Star Wars, has been beamed live from London to the US in what the company behind it, Musion, claims is a world first.

Musion performed the live transmission of a 3D hologram from its London studios direct to a stage at Infocom 09 in Orlando, Florida. A speaker in London appeared on stage as a life-sized image, and the speaker and the audience were able to see each other and respond and interact in real-time.

The technique has been used previously with pre-recorded 3D images, for example, by Madonna at the 2006 Grammys.

Musion, which owns the patents to the 3D technology and has developed the system, said that it is so realistic that audiences cannot tell the difference between holograms on stage and real-life presenters.

The effect was witnessed by IT PRO and we can report that the effect is astonishingly lifelike, with characters and graphics appearing as 3D in open space and appearing to hang in the air, with real depth and vibrancy.

Musion is working with network partner Masergy to provide the bandwidth.

James Rock, director of Musion explained to IT PRO that the effect was based on a Victorian technique called Pepper's Ghost, which uses a special glass and lightening effect to create illusory figures. Rock dubbed the system, as Goggle-free 3D', referring to the fact that current 3D technology as used in movies such as Monsters and Aliens require the audience to wear glasses.

The modern version uses a combination of technologies, involving an HD camera to capture the subject, a bright HD projector, a plastic foil rather than glass and advanced network technology to broadcast it.

Dumbleton said that the system is much more efficient than multiple codec telepresence systems as only one codec is required to capture the whole performance, no matter how many individual characters are included.

"With existing large telepresence deployments you are utilising three codecs and thus need three times the bandwidth, it's exactly linear. This system utilises a single codec and thus can be much more efficient."

The Infocom broadcast used a 6Mbps stream in both directions, with extra for audio.

Dumbleton said that the system would allow for much more open conversations than were currently possible as people could move around rather than have to sit at a table and look directly into a camera.

Rock said that this technology has a range of applications such as stage speakers for trade shows, entertainers and eventually as a sophisticated conference calling, beyond current systems such as Cisco's telepresence.

While the system is being initially aimed at enterprise customers, Rock says he sees this eventually moving into the consumer space as a regular videophone and as a future means of entertainment.

Other potential uses include car retailing, where customers could see a full size lifelike selection of the options of their choice and change them on the fly.

Rock said that it could not announce any customers for its technology but that it was in close talks with a major record label and a major TV broadcaster.