As servers and PCs get more powerful and their storage capacity grows exponentially is there really any need for defrag tools anymore? Diskeeper thinks so. 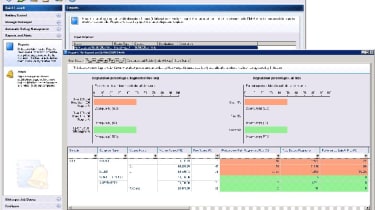 The I-FAAST (intelligent file access acceleration sequencing technology) feature runs an analysis on each volume to see what performance gains can be made. It then runs in tandem with background defrag jobs and moves frequently used files around so that that they can be more easily accessed. The SmartSchedule feature takes even more of the load off your hands as it keeps track of the number of files moved each time Diskeeper is run and dynamically alters the schedule as required.

Diskeeper really tries to keep as low a profile as possible as its InvisiTasking feature monitors I/O requests and pauses defrag jobs when other processes or programs want to access the hard disk. InvisTasking also does away with the need for creating manual jobs as it runs in the background to provide real time defragging. It aims to have zero impact on general performance as it monitors the system and only utilises unused resources. The local Diskeeper software provides a Dashboard view with a rolling graph showing idle resources and those being tapped by InvisiTasking.

There are some tasks beyond the Administrator's capabilities and if you want to view the Dashboard graph you'll need to load the local instance of Diskeeper. This isn't a problem as Administrator provides a remote control feature where you choose the target system and it'll bring up the local Diskeeper interface for you to view and configure.

The Diskeeper 2009 Server interface is virtually identical to that presented by the Professional version although it does also offer access to the optional HyperFast feature for defragging SSDs. The only other significant extra feature is the TVE (terabyte volume engine), which is designed to handle very high storage capacities.

We tested Diskeeper 2009 Server and using Administrator deployed it to systems running Windows Server 2003 R2 and Server 2008 in a few minutes. On the latter we used the Fragger utility to mess up the system volume and after leaving it to run for an hour or so, Diskeeper's disk analysis reported serious fragmentation to the tune of nearly one million excess fragments.

We set Diskeeper to work cleaning the volume up and it took nearly three hours to complete this task. However, with its armoury of automation behind it all further defragmentation was carried behind the scenes during the test period and had no further impact on server operations.

Diskeeper has been working hard on its business disk defragmenting solutions and it shows as this latest version delivers more features than any other product on the market. The Administrator is a must have for larger networks as it makes light work of managing multiple systems and many features of Diskeeper 2009 are designed to have a minimal impact on systems and operations.

With all serious competition falling by the wayside over the past few years, Diskeeper is now in the enviable position of having virtually no competition in the disk defrag market. Businesses that are convinced of the need to keep their servers and desktops regularly defragged need look no further as Diskeeper 2009 is an accomplished product and the Administrator component provides slick centralised management.