HP's latest business focussed notebooks have a new name and a new look. With plenty of power and a good price, are these the best machines for your business? 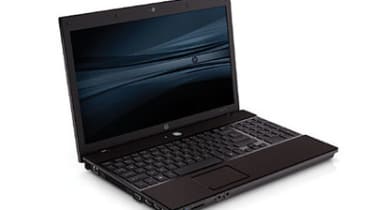 There's a similar amount of space for power-hungry applications the Fujitsu hard disk has a 320GB capacity, with 10GB held over for HP's recovery partition. It's a useful amount of space for applications and large files again, we found ourselves lamenting the fact that a machine perfect for mobile creative professionals didn't have the screen resolution to match.

Unsurprisingly given the price, the ProBook's HD credentials stop at the screen. The optical drive reads and writes to all the usual suspects, but lacks the ability to read Blu-ray discs.

It performed magnificently in our battery tests. With the processor idling it ran for six and three quarter hours impressive indeed for a laptop with such a large display. Under strain it was rather less impressive at just 1:52, but even so, under most circumstances you'll probably still see around four hours' worth of battery life from a single charge. It's enough for a lengthy presentation, or for those who find themselves with time to kill, a film.

Most of the usual components are here Gigabit Ethernet caters for those who want to add the ProBook to their existing office network, while the Intel WiFi Link 5100AGN caters for 802.11a/b/g and draft-n standards. On the front of each side of the ProBook are a pair of USB ports, which should keep most users happy, as well as a VGA port and, unusually, an HDMI port on the left hand side. The VGA port will come in handy for connecting to projectors; the HDMI port for expanding the ProBook's desktop, which could be a excellent way of bypassing the resolution limitations of the display.

Only a few things are missing, although none come as much of a surprise given the price. There isn't a TPM chip, which could prove a security no-no for some companies. We're not too impressed at the lack of a fingerprint reader, either, which would greatly speed up entering login information. Finally, this exact model (product code NA923EA) lacks mobile broadband, although other models in the ProBook range can be specified with HSDPA modules.