With a tilt screen, slide-out keyboard and speakerphone, the HTC Touch Pro2 sets out its serious business credentials? But is it the phone for you? 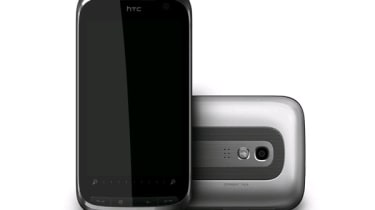 The Opera browser comes as default on the HTC Touch Pro, but Internet Explorer 6 is also included in the apps folder. It offer's improved browsing compared to previous versions of IE but it's still not as good as Opera.

It's a little disappointing that you'll still need to pull that stylus out of its holder to type on the touchscreen. Despite its best efforts so far, HTC still hasn't managed to develop a device that as full finger-friendly as the iPhone.

The keyboard, like most features on the HTC Touch Pro2, is large and the keys responsive. On issue we had though was that the keys are a little too soft, leaving you wondering whether you had pressed the key. A firmer keyboard with more definition between keys would make typing quicker.

One of the most impressive features of the HTC Touch Pro2 is the speakerphone on the back of the device. It works with HTC's new Straight Talk solution, which enables you to switch between email, voice and conference functions really easily. You can organise conference calls via email, call participants directly from your email, and then to enter conference call mode, you just turn the phone over on a flat surface so the phone speaker is facing upwards.

We were impressed with the speaker quality, especially as the speaker itself is designed to appear just as an aesthetic feature. It's not often form and function are married so well in Windows Mobile devices and credit to HTC for this.

Another cool touch is that you can silence a ringing phone simply by turning the phone over to have the speaker face up.

One of the reasons the HTC Touch Pro2 is such a chunky monkey is down to the large 1500mAh battery. With so many extra features, it's important to include a powerful battery to match, and the battery in the Touch Pro2 will provide several days use with light use we achieved four days between charges making a few calls and downloading 50MB a day.