Ever wondered what virtual machines are and how they work? Here's our guide to virtualisation 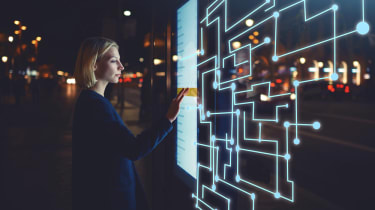 Virtualisation is the process of taking physical computing objects, such as servers and network gear, and turning them into software-based alternatives. These ‘virtual’ equivalents help businesses reduce IT equipment expenses and physical footprint, and help increase efficiency and agility.

Virtualisation has transformed how businesses operate and how their employees work day-to-day. Besides from freeing up physical space, perhaps its biggest advantage is the way virtualised components are able to integrate with each other, something that might have been difficult, or even impossible when using certain types of hardware in the past.

However, before we go into the nitty-gritty of virtualisation, it’s worth explaining how it’s usually deployed in a business.

To best understand how virtualisation happens, imagine you have five physical computers, each running their own operating systems and associated software. With virtualisation, it’s possible to detach each OS and its corresponding software from their computers and merge them into a single ‘host’ computer, all while keeping the software separate and running as if they are in individual machines.

These separate virtual software instances are known as virtual machines (VMs), which are coordinated by a single physical computer using software known as a ‘hypervisor’. Through a hypervisor, a computer is able to manage all the VMs it has running, as well as share memory usage, network bandwidth, CPU cycles, and other resources between them, based on demand.

Essentially, this means that those five computers have been merged into a single machine while retaining the ability to function independently.

One of the main building blocks of virtualisation is the VM. This is best thought of as a computer functioning in its own right, only without the physical presence you would normally expect. When deployed, a VM is capable of opening up an additional operating system on a single device, complete with its own software.

To ensure VMs work as smoothly as possible, it's pretty vital there's a high level of virtual memory available on the host computer.

This helps applications to improve overall performance and store and receive data. It's enabled by small additions to a machine's hardware, called segments or pages, that store the extra data a physical machine cannot.

It's enabled by small additions to a machine's hardware, called segments or pages, that store the extra data that a machine cannot.

Virtual Desktop Infrastructure (VDI), is where an organisation purchases virtual desktops hosted by a third-party vendor and therefore don't have to deploy the technology on its on-premises infrastructure, lowering its costs and simplifying deployments.

According to Nick McQuire, VP of enterprise research at CCS Insight, the development of desktop-as-a-service, or DaaS, is proving very popular.

"Virtual desktops and applications have been trending within enterprise IT for over a decade, ever since the growth in remote working has increased the need for mobile workstations, strongly encouraging many organisations to implement the technology," he says.

"As virtual desktops aren't hosted locally on the users' devices, an organisation can distribute stripped-down machines, known as thin clients, with access to company applications and data in the data centre to cut down on hardware costs and simplify management."

Many of the merits of virtual desktops also apply to app virtualisation, which allows users to access apps without storing them locally and businesses to have more control over their usage.

"New uses of the technology have opened up the virtualisation of third-party specific applications such as Microsoft's Skype for Business or browsing," McQuire says. "Security requirements and compliance changes such as GDPR have also helped as more firms look for more control and visibility of the apps their employees use."

"As more organisations look to upgrade the 300 million or more PCs in enterprises that are over five years old, they are embracing newer PC platforms. The likes of Google Chromebooks and Microsoft's Windows 10 are growing heavily in the public sector in the US."

There are many benefits of virtualisation for the enterprise. Firstly it's cost-effective. When applied storage, servers and desktops it can release assets, reducing overheads and operational fees, as well as decreasing the need for so many software licences that need to be used.

Virtualisation is also good for the environment, with less server and storage resources needed - meaning nothing needs to be cooled down. Also, there are fewer units to dispose of when the end of life comes, so nothing goes to landfill.