Microsoft: One year under Steve Ballmer

It's been one year since Bill Gates left Microsoft in Steve Ballmer's hands. What kind of year have we seen? 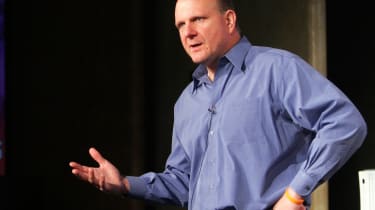 Given how much the operating system business contributes to Microsoft's bottom line, this is a major confidence booster for the business as a whole. It won't do cash flow much harm, either.

There are, too, victories for Microsoft that have flown under the radar somewhat. It's picked up an overwhelming majority stake in the netbook operating system market, demonstrating again a pragmatism that you wouldn't always associate with the firm when it relaxed its plan to place application limits on the version of Windows 7 being targeted at such machines.

And its Xbox gaming business maintained its current lead over Sony's PlayStation 3 machine.

That said, not everything has gone to plan. Microsoft's relationship with the European Commission doesn't look too friendly, and as such Microsoft will be selling Windows 7 in Europe with no web browser installed.

Furthermore, Office 14 is now set for 2010, and looks to have a tough job on its hands. While Office 2007 won critical acclaim, it's fair to say that there's not been a stampede to take it up. For Office 14, the task it faces is going to be as tough as that side of the business has ever faced.

The firm also needs to put more detail onto its cloud computing plans, where it faces significant competition. This could yet prove to be one of the biggest obstacles to the company's ongoing success, and Ballmer while making the right noises thus far needs to ensure that Microsoft has a more significant seat at the proverbial table.

There's also the fact that Microsoft has failed to make a significant acquisition. Granted, it gets tougher each time for the firm to do so, yet in the social networking sector, for instance, it's still reliant on its stake in Facebook now surely worth a lot less than what it paid for it to keep its toe in the door.

Speculation has linked Microsoft with buying up more of Facebook, or perhaps investing in Twitter, but this remains a major market area where the firm lacks a significant property.

Finally, there's the economy. Microsoft has already moved to dampen expectations for what impact Windows 7 will have on the PC business, and with the business shedding thousands of workers in the last year to keep its profit margins in tact, Microsoft is clearly not immune to the challenges of the current economic situation.

However, you suspect that had Microsoft investors been offered the particular set of cards it holds in its hands this time twelve months ago, they would have snapped them up with glee. And for Ballmer, it's been a quietly confident first year in the job. There's little suggestion, of course, that he's done a perfect job, and there are still many problems to resolve.

But, crucially, there's little suggestion that Microsoft is missing Bill Gates either.