The Nokia N97 has been compared to the business-centric E90 Communicator, However, our first look was less than complimentary, so how does the touchscreen N97 fare after a long, hard look? 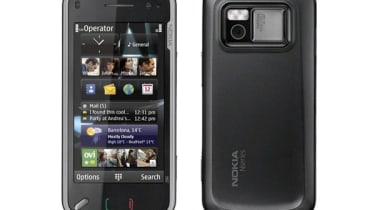 The Nokia N97 is probably Nokia's most long awaited smartphone, with many comparing its potential talents to the original Nokia E90 Communicator, a device that some view as the best business device ever.

Yes, both feature a hidden full Qwerty keyboard, and both use the Symbian S60 operating system, but what has Nokia added to make the N97 look and feel more advanced?

Firstly, there's that touchscreen. It's bright and clear, measuring 3.5in, however, it's not as high resolution as similar devices at 360 x 640 pixels, but this isn't particularly noticeable.

The Nokia N97's screen is resistive rather than capacitive as the iPhone's screen is. This means it's nowhere near as responsive and is a little hit and miss when trying to carry out tasks such as typing on the virtual keyboard rather than using the hardware keyboard.

However, the screen does take on a widget-based interface, that comes in handy if you're the sort of person who has little time to trawl through the internet or your phone for information.

Navigating round the Nokia N97 is somewhat of a chore and demonstrates that the Nokia S60 rel.5 interface hasn't been thought out as well as it should have been. Scrolling isn't as simple as on an HTC device or the iPhone. You have to use a scroll bar rather than the whole screen and that becomes fiddly. Also, buttons are used for different things in different menus so you'll have to remember what does what where too.

Sliding the screen up, as on the HTC Touch Pro2 enables you to access the full Qwerty keyboard.

However, the Nokia slide is leaps and bounds behind the HTC. The slide isn't smooth at all, and is easy to trap your fingers in, resulting in blood blisters galore. The struts aren't metal, but plastic, leaving us wondering exactly how long the screen will stay attached to the keyboard and there isn't the option to have the screen lay flat, making it hard to type without the aid of a flat surface.