Synology's latest NAS goes on a diet by using 2.5in drives rather than regular 3.5in models. We see if it still has enough beef to impress. 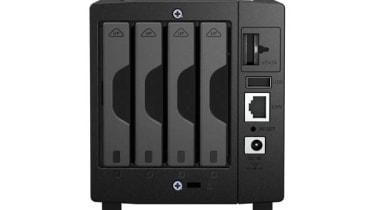 It's a four-bay barebones NAS, which takes 2.5in laptop hard disks rather than the usual 3.5in desktop variety. It isn't the first Disk Station to do so it's possible to buy sleds for the two-bay DS209, which convert the 3.5in bays to 2.5in.

However, this is the first Disk Station to be designed specifically for the smaller disks. The benefits are numerous. Most obvious is the smaller size of the unit. Measuring just 120x105x142mm, it occupies less than a quarter of the desk space of its bigger brother, the DS409. Second, it uses less power. Although, pound for pound, you don't get as much capacity in a 2.5in disk as with a desktop disk, you'll still save money on your electricity bills. Third, laptop disks tend to have higher MTBF ratings than desktop drives, so the DS409slim should be more reliable. Finally, the smaller disks are quieter, which means this is one of the quietest NAS devices we've seen.

Aesthetically, the DS409slim isn't as ugly as other Disk Stations and the combination of matt and glossy black plastic combine to make it almost stylish. The front panel is adorned with LEDs to show the status of the system and each installed disk. There's a front-mounted USB port, but the power and USB copy buttons (for backing up USB flash drives) are neatly tucked around the side.

You'll find the expected Gigabit Ethernet port at the rear, plus another USB port and an eSATA port. Given the size, it's no surprise there's an external power supply, but it's much smaller than the DS409's. A 60mm fan is mounted in the base and exhausts hot air, but only spins when the disks reach a predetermined temperature. Even when it's running, it along with the disks is virtually inaudible from 30cm away.

Installing disks is simple. Pull out a sled, screw in a disk and slide the assembly back in. In addition to basic and JBOD, you can choose between RAID 0, 1, 5, 6 and 5+spare. The latter means three disks are used in a RAID 5 configuration and the fourth the spare is automatically used if one of the first three fails.

Setting up the DS409slim isn't tricky either. Once you've installed the Assistant application from CD, it will search your network and locate the NAS. You'll have to download the latest firmware version (around 90MB), as the unit is shipped blank. Once this is uploaded, you can log onto the web interface and create a RAID volume.