Offering the power of a workstation in a portable package has a lot of appeal. We check out this seriously heavyweight offering from HP. 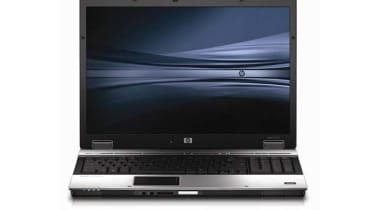 The workstation benefits don't end there. HP lists a huge range of ISV (Independent Software Vendor) certifications. Included in the range are the main applications from both Autodesk (Autocad and so on) and Adobe, including Premiere Pro and Photoshop.

It's made possible by the workstation graphics adapter. Instead of Nvidia's consumer range of GeForce adapters, HP has installed the Nvidia Quadro FX 2700M. It's ISV-certified, and supplies 512MB of GDDR3 RAM and has 51.2GBps of memory bandwidth available. The 48 cores available mean the EliteBook has an absolutely vast amount of workstation power on tap.

And it isn't exactly slow when it comes to non-graphical tasks. At its heart is the Intel Mobile Core 2 Duo T9600, which runs at 2.8GHz. It's not particularly cool-running the 45nm processor's maximum TDP (Thermal Design Power) is 35W but it supplies plenty of grunt. As if that wasn't enough, HP installs 4GB of DDR2 RAM. Better yet, it's installed in a single SODIMM slot, so upgrading is simple. The results in our benchmarks were the proof: 1.43 is remarkable for a notebook. Storage is via a 320GB hard disk more than enough for most users. It too is a high-performance component, spinning at 7,200rpm to most laptops' 5,400rpm disks. The LightScribe-compatible DVD writer takes care of removable storage.

It's unlikely that the EliteBook will spend much time away from the mains at 3.65kg (4.61kg including the power adapter) it's simply too heavy to tote around, and too big for most travelling environs. It will make you no friends on the train, measuring 393mm across. Under light use the EliteBook ran for exactly three and a half hours in our battery tests; it dropped to 1:59 under intensive use. The times are reasonable despite the thirsty processor, but they don't make the EliteBook any more portable.

The system's chassis is very solidly-built. The keyboard is one of the best examples we've seen: solid as a rock, with pleasant-feeling keys that make fast typing a breeze. The mouse buttons feel similarly expensive reassuringly chunky.